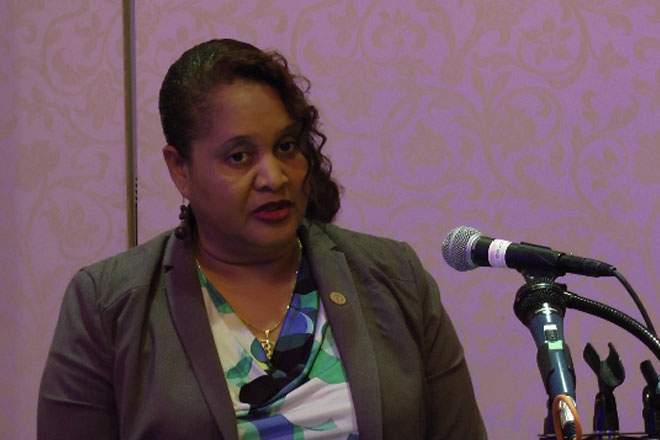 (ZIZ News) – Climate change and the upcoming dry season are the main points of discussion during a two-day forum being held at the St. Kitts Marriott Resort.

The 2015 Dry Season – Caribbean Regional Climate Outlook Forum (CariCOF) meeting brings together representatives from climate sensitive sectors to discuss the next season’s forecast and how it will impact their interests.

During the opening session, Permanent Secretary in the Ministry of Infrastructure, Brenda Boncamper said the event is timely. In noting the importance of addressing the issue of climate outlook she said, “I am hopeful that this meeting will build synergies among our Caribbean islands: adding that “CariCOF has assured that with each training workshop, more forecast products will be delivered to its stakeholders.”

One of the main items on the agenda is the delivery of the six month forecast for the region.

Chief of Applied Meteorology and Climatology at the Caribbean Institute of Meteorology and Hydrology (CIMH), Adrian Trotman told ZIZ News that that plan is important because “The forecast often has implications.”

“The sectors after that group together and discuss what are the implications of the forecast for them and then they discuss with us how they should respond to the potential situation of the next three to six months,” he explained.

Lester Arnold, Project Coordinator at the OECS Commission, noted that it was necessary to work with the CIMH on this initiative as climate variability has had significant impact throughout the region.

“We’ve seen the need for the partnership with CIMH because climate change is real. It is here to stay and it’s not going away. Climate variability is also creating a bit of havoc on some of the island states as we’ve seen this year with regards to the drought. This is the second time in the history of Potworks Dam in Antigua that it has gone dry,” he said.

“We’ve also seen the highest temperatures on record for the last 50 years and things of that sort so definitely we can say that climate variability is causing some trouble,” he continued.

The climate sensitive sectors represented at the meeting include tourism, agriculture, health, and energy.

According to organisers, the forum provides seasonal climate forecasts and interpretations and are therefore critical in the development of early warning systems for the region.