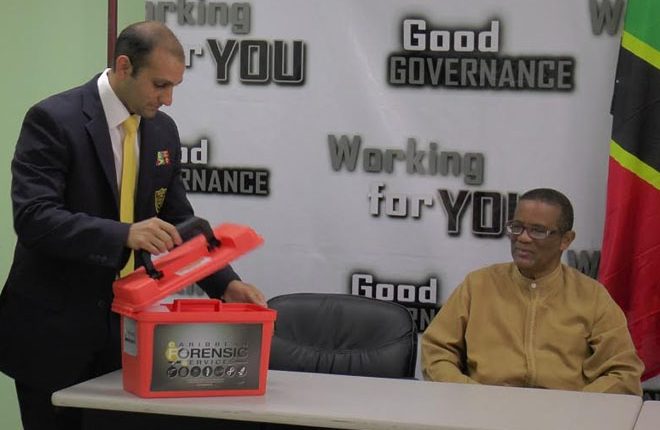 (ZIZ News) — As a result of a partnership established earlier this year, the Royal St. Christopher and Nevis Police Force, on Friday, was presented with a Master Biohazard Evidence Collection Kit.

It came one day after an advisor to the local police force spoke of the need to build more criminal cases based on forensics.

Late Friday morning, the Parliamentary Lounge at Government Headquarters was buzzing with activity as Amalgamated Security Services Limited presented the Master Biohazard Evidence Collection Kit to the Ministry of Foreign Affairs which in turn, presented it to the local police force.

Chief Forensic and Criminalist Officer for the regional agency, Dr. Maurice Aboud spoke of the partnership between both institutions.

“This kit arose out of the Association of Caribbean Commissioners of Police Conference in whereby Amalgamated Security has employed or developed into a forensic support programme whereby allowing Commissioners of Police within each island to specify to a forensic kit of their choice in which they see as a major need for their particular island and the Royal St. Christopher and Nevis Police Force had selected the Master Biohazard Evidence Collection Kit,” he said.

The Master Biohazard Evidence Collection Kit, according to Dr. Aboud, was designed to allow safe collection and preservation of evidence from biological hazards and crime scenes.

He said it will be able to collect and document evidence that could be further processed through forensic laboratories and possibly lead to crime conviction.

“I must thank, once again, Commissioner Liburd for taking us up on that free kit and seeing the value as we try to further build and support the relationship between law enforcement agencies and private security organisations because we are in this together in the effort to fight against crime and whatever we can do to help give back and provide the necessary support, we are very glad and happy to do so,” he said.

“We recognise in this Federation that crime fighting will always be expecting in the traditional way of eye witnesses so we’re depending a lot on technology and this kit here, which is before me today and handed to me today, would assist the Forensic Division in the Royal St. Christopher and Nevis Police Force,” he said.