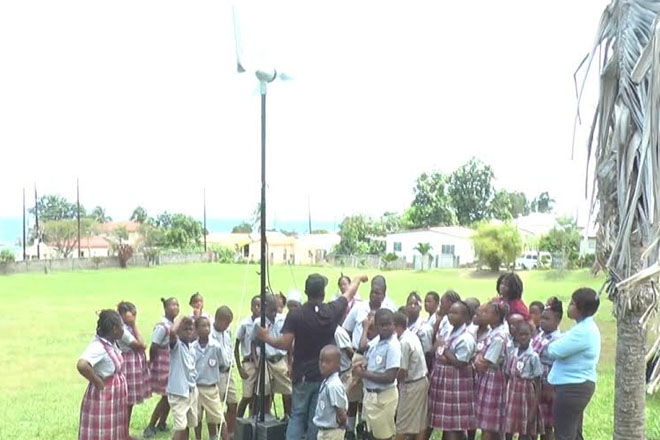 (ZIZ News) — With Earth Week just over a week away, a local technician is using his knowledge of renewable energy to educate students at both primary and secondary school levels.

ZIZ News caught up with Justin Caines after a session at the Joshua Obadiah Williams Primary School in Molinuex.

He said his aim is to teach young people on the effectiveness of renewable energy, stating, “I taught them how the energy really do work from the solar panel, the wind turbine and I hope the project will benefit not just the students but the teachers and the public as a whole on how the system works.”

Caines said he is trying to change misconceptions and garner interest in renewable energy.

“Once people get the education on how they work and once they understand that’s its more reliable—because some people still don’t think that solar energy works—so once they understand and they are educated properly on how the system really works then I can get a few more people involved then the cost of the solar energy for instance the solar panels, the batteries, the wind turbine, it will lower because its finding more people involved then the company outside will lower the cost of these,” he said.

During his presentations, Caines displayed a wind turbine, 2 solar panels, and a solar generator comprising of a charger controller, a battery bank and an inverter.

According to Caines, discussions are ongoing to form a partnership with the government to introduce renewable energy education in schools.