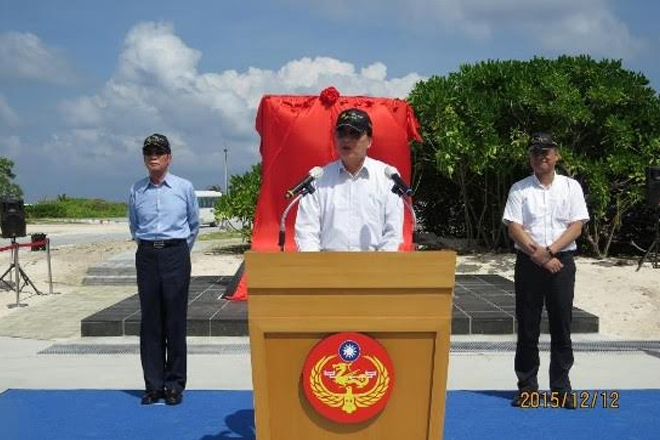 On December 12, 2015, Minister of the Interior Chen Wei-zen and Minister of the Coast Guard Administration Wang Chung-yi, together with officials from the Ministries of Transportation and Communications, Science and Technology, Economic Affairs, and Health and Welfare, as well as the Environmental Protection Administration, flew to Taiping Island in the Nansha (Spratly) Islands to preside over a ceremony marking the completion of the Taiping Island Transportation Infrastructure Project, which involved the renovation of the island’s wharf and lighthouse. Minister Chen stated that, as head of the ministry responsible for administration of the nation’s territory, he was honored to personally witness this historic event. On behalf of the Republic of China government, he expressed gratitude to staff of the CGA and MOTC, as well as construction workers, for their efforts over the past two years, and extended his sincere appreciation to past officials for having spared no effort to safeguard the ROC’s territorial and maritime interests, and to the CGA personnel who have long defended the island.

In recent years, tensions have been high in the South China Sea. Parties concerned have claimed sovereignty and maritime rights over islands and reefs in the region in a variety of ways. In particular, the development of the ongoing Philippine arbitration has made the situation the focus of great international concern. With regard to disputes in the South China Sea, the Executive Yuan and Ministry of Foreign Affairs have released numerous statements declaring that, whether from the perspective of history, geography, or international law, the Nansha (Spratly) Islands, Shisha (Paracel) Islands, Chungsha Islands (Macclesfield Bank), and Tungsha (Pratas) Islands, as well as their surrounding waters, are an inherent part of ROC territory and waters, and that the ROC enjoys all rights over these islands and their surrounding waters in accordance with international law.

To create a mechanism for the peaceful settlement of disputes, President Ma Ying-jeou proposed the South China Sea Peace Initiative on May 26 this year. This initiative reiterates the ROC government’s longstanding principles of safeguarding sovereignty, shelving disputes, pursuing peace and reciprocity, and promoting joint development. In addition, based on respect for all relevant international laws and regulations, including the United Nations Charter and UN Convention on the Law of the Sea (UNCLOS), it expresses the ROC’s willingness to work with other parties concerned, through consultations conducted on a basis of equality and reciprocity, to jointly ensure peace and stability in the South China Sea, uphold the freedom of navigation and overflight, and conserve and develop resources in the region.

Minister Chen pointed out that Taiping Island is the largest of the naturally formed Nansha Islands, with an abundance of natural resources and groundwater wells. Results from water quality tests conducted by an institution authorized by the Executive Yuan’s Environmental Protection Administration show that the proportion of freshwater in four of the existing wells is 99.1, 75.8, 97.5, and 96.8 percent, respectively, averaging 92.3 percent. Minister Chen and other officials tasted water directly from one of the wells, and remarked on its high quality. About 65 metric tons of water can be pumped from these wells daily to provide drinking water and meet cooking and everyday needs. Natural vegetation flourishes on the island, providing coconuts, papayas, and plantains. For years, personnel stationed on the island have made use of its various resources, growing fruits and vegetables, and raising poultry and livestock to meet their daily needs. Lunch December 12 consisted of chicken, loofah gourd, bitter melon, coconut water, plantains, and other food either growing naturally on the island or raised by personnel stationed there. To meet religious needs, a Guanyin Temple was built in 1959, where the Bodhisattva of Compassion is worshipped. From legal, economic, and geographic perspectives, Taiping Island indisputably qualifies as an “island” according to the specifications of Article 121 of the UN Convention on the Law of the Sea, and can sustain human habitation and economic life of its own. It is thus categorically not a “rock.” The ROC government will firmly defend this fact, and maintains that none of the Philippines’ arguments in its ongoing arbitration, nor any other claims which aim to deny it, will impair the status of Taiping Island and its maritime rights based on UNCLOS.

Minister Chen said management efforts made by the ROC government in recent years are aimed at gradually transforming Taiping Island into a peaceful and low-carbon island, as well as an ecological reserve, in the spirit of the South China Sea Peace Initiative. The ROC Coast Guard Administration was established in January 2000 and its personnel then replaced marines on the island. This was, in effect, an ROC declaration to the international community of its determination to use Taiping for peaceful purposes. After the CGA took over administration of the island, medical services were increased at the Nansha Hospital with assistance from the Ministry of Health and Welfare. The hospital now has 10 beds, two doctors, a dentist, and two nurses. A telemedicine service system has been set up with Kaohsiung Armed Forces General Hospital for long-distance consultation so as to provide medical care to personnel stationed on the island as well as fishermen from different countries operating in neighboring waters. In case of emergency or severe illness, the hospital will have a vessel transport patients to Taiwan for treatment. It also provides emergency medical care and rescue services to passing vessels and crews. Over the past decade, it has offered humanitarian assistance to 21 people in 20 cases, including Philippine and Myanmar nationals, fully demonstrating its dedication to humanitarianism.

The ROC’s aims in renovating this lighthouse, which goes into use today, are also peaceful. The South China Sea is a crucial thoroughfare for ships passing between Asia, Europe, and Africa, but replete with shoals and submerged rocks. The lighthouse on Taiping Island will help the ROC fulfill its international responsibilities by allowing the safe passage of ships through the surrounding waters, preventing shipwrecks, loss of life, and marine pollution, and contributing to the safe seaborne transport of goods and the provision of humanitarian aid.

Taiping Island is a very important place ecologically, with extremely rich marine biodiversity and fisheries resources, Minister Chen said. To protect these natural resources, the Kaohsiung City government established a turtle refuge on Taiping Island in 2007, while the Ministry of the Interior began a survey on biological diversity on Taiping Island in 2009, the results of which were made public when it was completed last year. These efforts show the ROC government’s determination to protect the marine environment of the South China Sea.

At the end of 2014, the Ministry of Economic Affairs set up solar panel banks with output of 160 kWp. Paired with storage batteries, the system can provide up to 200,000 kWh of power annually, reducing carbon dioxide emissions by 107 metric tons. With the assistance of the Ministry of Science and Technology, the system’s efficiency and output will be enhanced in the future. As a result, Taiping Island is now on its way to reaching the goal of becoming a low-carbon island. Looking ahead, the ROC will continue surveys on the natural resources in the waters around the island as a reference for jointly developing these resources with neighboring countries.

In addition, to promote international cooperation in the South China Sea, the EPA has, since 2009, been testing water quality at Taiping Island, and has opened a background monitoring station on Tungsha Island that cooperates with the Aerosol Robotic Network (AERONET) of the US National Aeronautics and Space Administration (NASA).

In 2010, the EPA cooperated with the US National Oceanic and Atmospheric Administration (NOAA) on monitoring greenhouse gases, attesting to the nation’s commitment to joint international monitoring as well as its important role in regional monitoring efforts. The importance of Taiping Island, located as it is in the middle of the South China Sea, cannot be overstated. The EPA will continue its current monitoring efforts, and increase the frequency of seawater sampling. The agency will adapt its Tungsha Island model for conservation science research on Taiping Island. The Ministry of Science and Technology, meanwhile, is evaluating the establishment of a scientific research station on Taiping Island for research projects in such fields as seismology, weather, oceanic currents, and ecological conservation. The station could also provide advance-warning and information-sharing systems concerning potential natural disasters resulting from climate change, as part of a future international cooperative mechanism for disaster prevention and reduction.

Minister Chen also pointed out that the occasion marked 69 years since Taiping Island was restored to the ROC in 1946. Formally dedicating the wharf and lighthouse on this historic date symbolizes connections both to the past and the future. The Republic of China hopes, through this infrastructure project, to make Taiping Island a peaceful and low-carbon island, as well as an ecological reserve, as a way of further implementing the South China Sea Peace Initiative and showing the international community the ROC’s resolve to be a peacemaker in the South China Sea by shelving disputes and jointly developing resources, to transform it into a “Sea of Peace and Cooperation.”