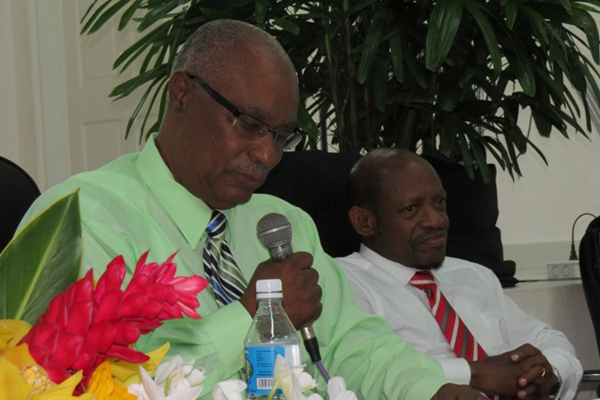 Rock-solid commitment between NRP and Labour will continue

Basseterre, St. Kitts (CUOPM) — St. Kitts and Nevis’ Prime Minister the Rt. Hon. Dr. Denzil L. Douglas said the rock-solid commitment between the Nevis Reformation Party (NRP) and the St. Kitts-Nevis Labour Party (SKNLP) will continue to work in a focused and effective style to the benefit of the entire Federation.

“For reasons beyond our control, we may not have had the opportunity, over the past two years, to display the full benefits of sweeping, across-the board collaboration at the highest levels. That notwithstanding, however, over the past five years, NRP and Labour have ensured that Kittitians and Nevisians were able to see and understand the meaning and the importance of the oneness of which NRP and Labour so often speak,” Prime Minister Douglas told the large crowd gathered at the Franklin Brand Community Centre in Camps Nevis.

He pointed out that for the past five years, the Honourable Patrice Nisbett, Parliamentary Representative from Nevis 11, has been serving this country and its people in the most high profile posts found in any government, anywhere.

Dr. Douglas said that the NRP and Labour established working union in 2010, not because NRP needed Labour, and not because Labour needed NRP.

“Labour had just won an election – an election in which we had won 75% of the seats on St. Kitts. And the NRP was already leading the Government in Nevis. We came together solely because, from positions of strength, and with the support of our respective islands behind us, we saw the importance of St. Kitts and Nevis beginning to work, and think, in a spirit of mutual respect, for the common good,” he said.

“Some five years ago, his Cabinet colleagues and I decided that the time had come to ensure that Nevis and Nevisians not only had a seat that at the parliamentary table, a seat which they themselves had earned, but that they had a seat in the inner Chamber of Cabinet , as a member of the Prime Minister’s highest level policy-making body, as well, in order that the views and interests and perspectives of Nevis could be put forward and not only put forward, but heard,” Prime Minister told the gathering.

He said that the oneness of which NRP and Labour speak is not a catchy political slogan.

“It is real. And it is this collaborative spirit which will, in 2015 and beyond, with your help, ensure that St. Kitts and Nevis attains even higher levels of real progress, and real change,” said Prime Minister Douglas.