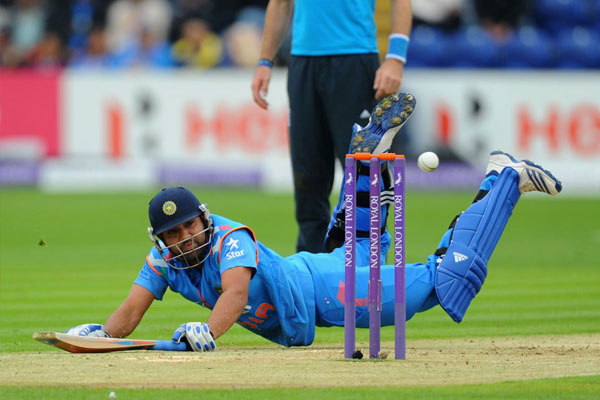 Sports Page — Rohit Sharma who missed the Champions League Twenty20 due to multiple injuries, will be unavailable for the limited-overs’ leg of India’s home series against the West Indies. Rohit is likely to be available for the three-Test series, starting October 30, that follows the five ODIs and one-off T20.

Rohit was initially ruled out for four weeks, which meant he could have recovered in time for the last two ODIs and the T20 game. But though his fractured finger has healed, it is understood he will take three more weeks to recover from his shoulder injury. Sharma is being monitored by BCCI physios at the National Cricket Academy in Bangalore.

It is also understood that neither the player nor the selectors are willing to rush him back to international cricket considering the major assignments that follow the West Indies series. The selectors and the team management believe Rohit will be a vital cog during India’s winter tour to Australia and the World Cup to be staged in Australia and New Zealand in February-March. As a result, he will not be considered for selection for the first leg of the series against West Indies. The ODI and T20 squads will be named on October 4.

Ajinkya Rahane, who scored his maiden ODI century while filling in for Rohit in England, should continue to partner Shikhar Dhawan at the top of the order, while the selectors are likely to persist with Murali Vijay as the back-up opener.

Rohit could be asked to prove his match fitness before he is selected for the Test series. If he recovers as per schedule, Rohit could feature in the Duleep Trophy semi-final if West Zone beat East Zone in their quarterfinal. If West Zone does not qualify for the Duleep semis, Rohit might be selected in the Board President’s XI, which will face the West Indians in a three-day tour game in Kanpur from October 25.

Rohit played only one of India’s five Tests in England and had to cut short his tour after fracturing his finger in the field during the second ODI.