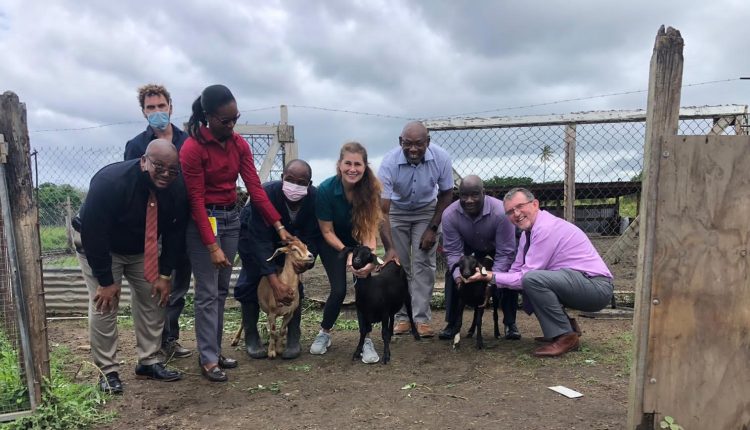 Efforts being made by the Department of Agriculture and Ross University School of Veterinary Medicine continue with aims to strengthen, improve and increase livestock and meat production in St. Kitts.

This was evident following the donation of 3 Boer Buck goats to the Department of Agriculture at Island Country Farm in Parsons Village on Thursday morning.

The Department of Agriculture and Ross University entered into an agreement to introduce a Breeding Program with an objective to improve the federation’s local flock and the dress weight of goat carcass.

During brief remarks, Minister of Agriculture, Hon. Alexis Jeffers said “Ross has been a very good corporate partner in the area of Agriculture and more specifically in terms of improving the Breeding programme here in the federation of St. Kitts and Nevis”.

He used the opportunity to highlight the advantages of having our local farmers raise the animals to produce quality meat. He said our people can always stand confident with the type of meat that is being consumed.

“The importance here is the genetic diversification of animals and how that improves the quality of the animal and it basically ultimately ends up as the quality of the product that is on your plate. None of this would have been possible without the involvement of students and I do want to stress, we have some of them here today, that these were the brains behind this initiative and gave us the power to really move forward with it”, Dr. Callanan said.

The Dean also expressed that he was grateful for the partnership between the Ministry of Agriculture and his team.

Permanent Secretary in the Ministry of Agriculture, Ron Dublin Collins commended goat breeders and Owners of Island Country Farm, Mr and Mrs Neal and Michelle Mitchell and said that it is the hope of the Ministry to expand the initiative to other farms as well.

Farmer Neal thanked all stakeholders for helping to make the program possible.

The Goat Breeding Program initially began in 2018 at Bayford’s but experienced setbacks such as sickness of animals, shortage of water and lack of transportation.

The animals were then moved to Island Country Farms in Parsons Village where the breeding resumed in March 2019.

Just about 40 offspring have so far been bred as a result of the program.