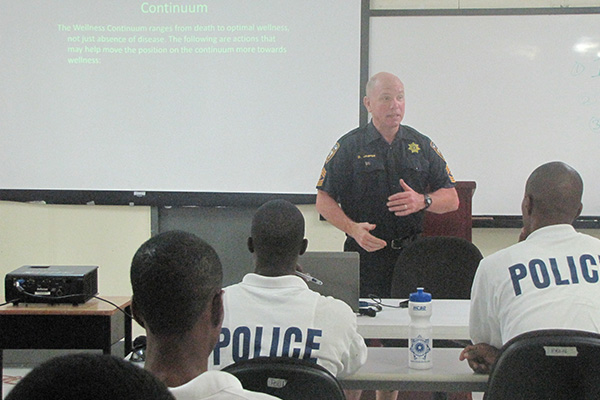 Basseterre, St. Kitts — On Wednesday 11th December 2013 at the Police Training Complex, the Royal St. Christopher and Nevis Police held a closing ceremony for a Basic Bicycle Patrol Training Course. The course started on Monday 9th December 2013, which covered many subject areas such as The History of the Bicycle, Where bicycle patrol is used, Advantages & Disadvantages of bicycle patrol unit, Bicycle Safety and Equipment, Hydration; and Cat Scan, just to name a few. There were fourteen (14) participants trained; thirteen (13) males and one (1) female, who were attached to different stations.

The course perspective was given by No. 669 Constable Jefferson Forde, who indicated that the course started with some challenges and fun. However, during the training they applied the skills taught and became more appreciative training which make skilled and knowledgeable of the bicycles and use of bicycle for Law Enforcement duties.

Sergeant Jasper David, the course’s instructor and facilitator who hails from Houston, Texas said that it was good of being invited to the Federation to conduct the training and share his knowledge and skills with members of the Royal St. Christopher and Nevis Police Force. He indicated that It is warm and sunny, and thanked everyone for welcoming him. Sergeant Jasper David mentioned that during the  course he saw one of the most impressive classes he has ever seen in his life, and added that everyone gave 100% effort.

Commissioner C.G. Walwyn in his address thanked the students for participating. He thanked the Lieutenant Albert Johnson of Harris County Sheriff’s Department who was once his boss but now addresses him as “Commissioner” for his support and assistance. He also thanked Sheriff Garcia of Harris County Sheriff’s Department for his dedication in the advancement in the fight against crime in the Federation of St. Kitts and Nevis. He added that Sheriff Garcia has nominated the Royal St. Christopher and Nevis Police Force as a sister agency to the Harris County Sheriff’s Department. The Commissioner also thanked the persons present for attending the closing ceremony, and showing support to the participants. Commissioner CG Walwyn takes this opportunity to inform the general pubic that these police officers will soon be seen on the streets patrolling on their bicycles.