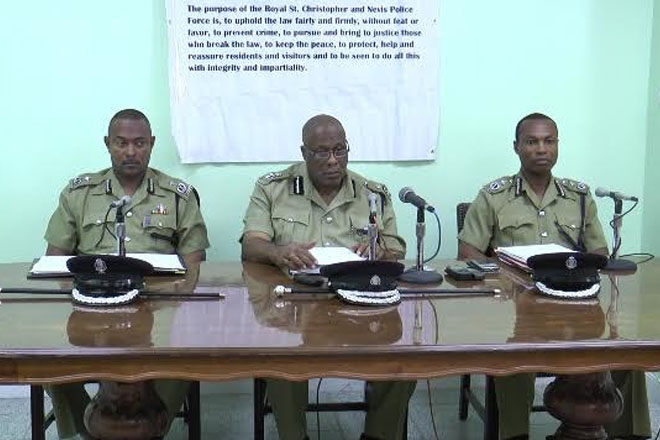 RSCNPF Seizes Thousands of Dollars Worth of Marijuana in Drug Bust, One Person Killed During Shootout

Acting Commissioner of Police Stafford Liburd addressed media officials on Thursday afternoon, following news of an early morning drug bust which led to the seizure of several hundred thousands of dollars worth of illegal drugs and one person being killed.

Liburd’s comments came during a press conference organised by the Royal St. Christopher and Nevis Police Force that was broadcast live on ZIZ Radio and Television and streamed on www.zizonline.com.

According to the top cop, the bust and shootout occurred around 5am along a beach in the Conaree area.

“Early this morning, October 1st 2015, members of the Royal St. Christopher and Nevis Police Force conducted an operation at a secluded beach in the Conaree area. During the operation, our officers observed a pickup truck on the beach and a speedboat approaching the shores. Upon the arrival, the two occupants of the vessel were challenged. One occupant opened fire on our officers. Our officers, in defence, returned fire and one of the occupants was fatally wounded,” the Police Commissioner explained.

Liburd added that four bales containing 124 pounds of compressed marijuana, along with a .380 pistol and a magazine with four rounds of ammunition were seized. In addition, three persons: two locals and one suspected non-national, were taken into police custody.

The drugs, he said, had a street value of EC$930 thousand.

Following his statement, Liburd, who was accompanied by Assistant Commissioners of Police Vaughn Henderson and Ian Queeley, fielded questions from the media representatives.

When asked about the need for the press conference, Liburd said, “Once I believe life has been lost, then we deem it important that we bring this to the attention of the public with urgency and that is very important to us. Confrontation with the police and also too, it happened at our border and you’re well aware that we’re concerned about illegal activities and persons entering our country and that is one of the reason that we think that we must inform the public urgently.”

He said, “We regard this operation as a very significant operation, particularly because of the drug find, the significant quantity of drugs that were found and the fact that persons, who are non-nationals of St. Kitts, were involved in this particular incident and so, believe that it is extremely important that we come forward in this way to the general public, via the media, simultaneously to provide the best information.”

The police high command was supported at the press conference by acting Prime Minister and Nevis’ Premier, the Hon. Vance Amory and acting Minister of National Security, Hon. Ian Liburd.

The press conference was held in the Parliamentary Lounge at Government Headquarters.