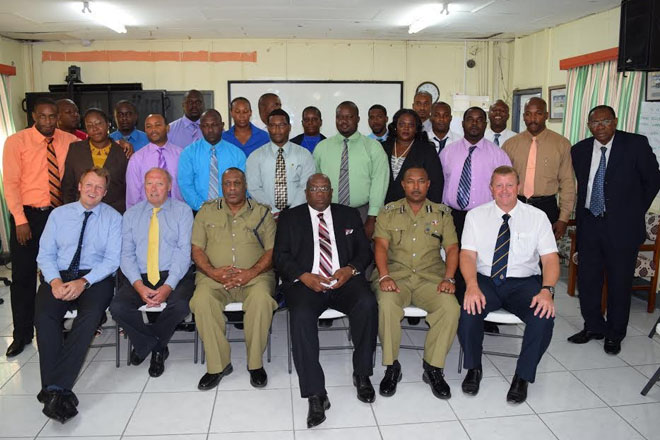 Basseterre, St. Kitts (RSCNPF) — Commissioner of Police (AG), Mr. Stafford Liburd, while addressing the 2015 participants at the Closing Ceremony of an Investigators Course hosted by the Ministry of National Security, stated that it is important for these kind of training sessions to be conducted in efforts of sharpening the skills of the officers if they are to successfully deal with the challenges presented by the increase in criminal activities as the world advances.

The Closing Ceremony for the Investigators Course that began on July 27th 2015 was held at the Police Training School yesterday, August 12th 2015.

“It is impossible to prevent crime, but proper investigators are needed for when the time arises; therefore, their skills need to be sharpened,” said the Acting Commissioner.

He added “Relevant training and advancement is important in efforts of taking the force forward successfully… We are working towards improving our technology and the use of Forensic Science in the modern world to successfully fight crime.”

The Closing Ceremony was attended by Permanent Secretary in the Ministry of National Security, Mr. Osmond Petty, as well as the Prime Minister of the Federation of St. Kitts and Nevis and Minister with responsibilities for the Ministry of National Security, Hon. Dr. Timothy Harris, amongst a number of Gazetted police officers, facilitators and course participants and the media fraternity.

A total of twenty (20) individuals, a mixture of Police officers of the Royal St. Christopher and Nevis Police Force and officers of the Customs and Excise Department, received their certificates of successful completion from the Hon. Prime Minister.