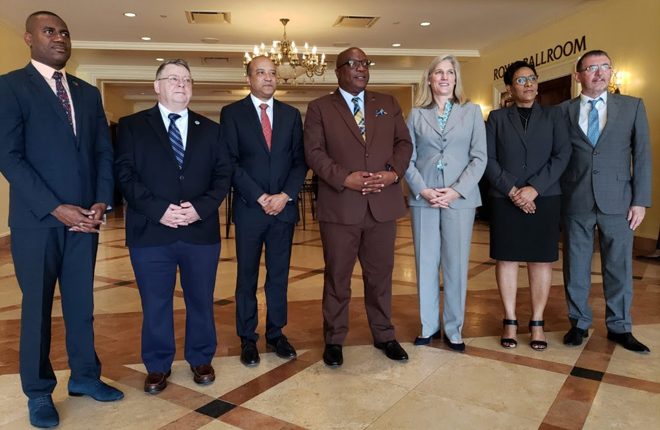 Adtalem Global Education Inc, the parent company of Ross University School of Medicine (RUSVM), has thanked the government and people of St. Kitts and Nevis for the level of hospitality and goodwill extended to the students and faculty, who were temporarily relocated to St. Kitts in 2017.

In October of 2017, more than eleven hundred medical students and over 150 faculty and staff of the Ross University School of Medicine were forced to continue their classes on-board the GNV Excellent vessel in St. Kitts after the institution’s campus in Dominica suffered severe damages during the passage of hurricane Maria.

In a show of appreciation to the authorities in St. Kitts-Nevis, Adtalem Global Education, led by the president of the Medical and Healthcare vertical, Kathy Boden Holland, held a breakfast meeting at the St. Kitts Marriott Resort on Thursday November 29 2018 to honour the contribution of all those who played a role in facilitating the students and staff.

Holland said the students would not have been able to pursue their studies without the commitment and cooperation from the government of St. Kitts and Nevis.

Prime Minister Dr. the Honourable Timothy Harris said the decision by his government to accept the students from RUSM’s Dominica campus was the right one, despite the challenges St. Kitts and Nevis was facing at the time.

The Prime Minister further commended the high level of professionalism exhibited by local officials throughout the entire process, which led to an easier transition for both students and faculty.