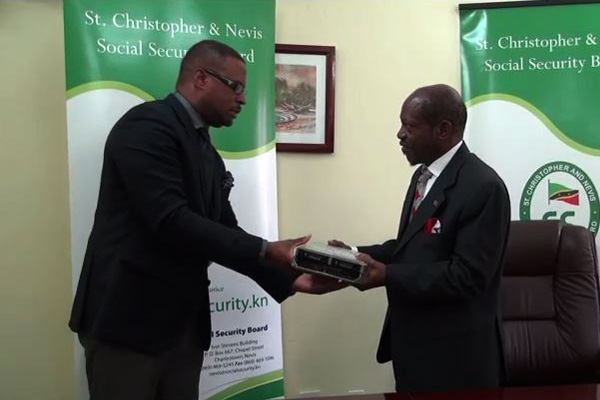 ZIZ News — The Nevis Island Administration’s Information Technology Department was on Thursday the recipient of $80,000 worth of computer equipment, stand and software from the Social Security Board [S.S.B].

In her remarks, S.S.B Director Sephlin Lawrence said it was important for Nevis to have the NIA’s Treasury fully functional and even more efficient. She therefore spoke of the board and the NIA’s longstanding partnership.

She said, “The government of Nevis has always enjoyed a very good relationship with the Social Security Board so when the NIA discussed their plight after the very unfortunate fire in January, we immediately decided to assist. We make a donation of US$100,000 towards the improvement of healthcare each year and Nevis is assured of at least US$30,000 of this sum. I recall at one time, some of the funds were actually used to purchase a very useful garbage truck.”

The country’s Prime Minister and Minister responsible for Social Security, the Right Honourable Dr. Denzil Douglas also attended the handing over ceremony. He officially presented the equipment to the NIA.

In doing so, Prime Minister Douglas pledged his cabinet’s willingness to continually assist the island of Nevis.

“The joint NIA-federal cabinet meeting yesterday [Wednesday 21st], Social Security’s presentation this morning [Thursday 22nd] and all of the other collaborative and cooperative efforts of the past speak to the oneness of our islands as a federation and I look forward as Prime Minister of both islands to the ongoing cooperation and collaboration that I am certain, as you must be, that lies ahead for us.”

He noted, “It is testimony to the care of Social Security that they have come to our rescue in Nevis in this fashion. It is $80,000 which is a significant amount by any analysis but not just $80,000 in terms of value. I think that the true value goes well beyond the monetary value in that this is an investment in Nevis in trying to put the government and the government’s affairs back on a footing, sensible footing after this tragedy we encountered on the 17th of January.”

Thursday’s donation of computer equipment to the Social Security Board seeks to assist the NIA in its recovery efforts after the Treasury Building and the equipment within it were destroyed by fire in January of this year.