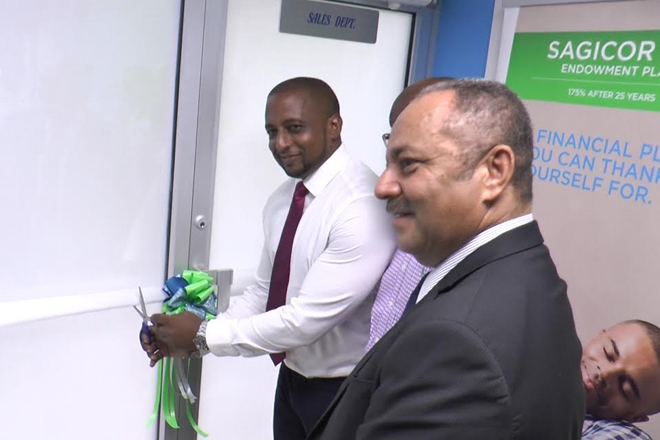 (ZIZ News) — In celebration of Sagicor’s 175th anniversary of operations in the Caribbean, Sagicor St. Kitts hosted the grand opening of its new offices and product launch reception on Wednesday.

As Sagicor Life Insurance meets the memorable milestone this year, it is taking steps to give greater opportunities to its customers in a comfortable atmosphere.

In his address, CEO of Sagicor Life Eastern Caribbean, Donald Austin gave an overview of the history of the organization, stating, “Sagicor was founded some 175 years ago as the Barbados Mutual Life Insurance Society. Within 5 decades of our establishment, the company expanded across the Caribbean from the Leeward to the Windward Islands, being established here in St. Kitts some 149 years ago in 1866. Today Sagicor has grown to be the leading indigenous financial services company in the region.”

This year, the company is offering its customers a major opportunity in the form of the Sagicor 175 Endowment Plan.

“The Sagicor 175 endowment plan provides policy holders with a benefit that provides a lump sum payment after 25 years. Simply put the plan not only provides life insurance coverage, but it also pays a lump sum at the end of the policy. A plan like this with a 75 percent bonus option has never been offered before in this market,” he said.

Agency Manager of Sagicor Life St. Kitts, Denrick Connor invited the public to take advantage of the limited time offer which will reap benefits in the future.

“In the year 2040/2041when these plans mature, they have the potential of injecting into the local economy well over 100 million dollars and so we want to invite each and every person to be the proud owner of one of these plans. The plan has a limited time offer and so prior to the end of this offer which will be in September, we invite everyone to ensure that you will have purchased your Sagicor 175 endowment plan.”

The company will also launch an I.P.O. (Initial Public Offering) later this year, which will give persons in the OECS an opportunity to buy up to 25 percent of Sagicor Life Easter Caribbean’s shares which will be listed on the Eastern Caribbean Stock Market.