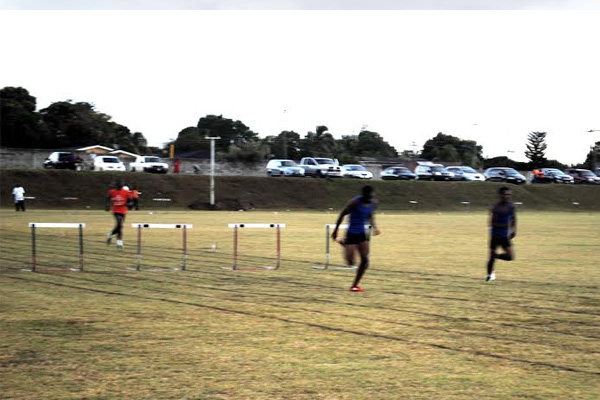 Sandy Pointers sample fruits of a new dispensation in style

Basseterre, St. Kitts — Was providence at play when Principal of the Charles E. Mills Secondary School, Mrs Carla Diamond, elected to have the school’s 48th Annual Sports Day to be held on Friday February 27, 2015?

When Mrs Diamond and her sports management team made arrangements for the 48th Annual Sports Day to be held at the Sandy Point’s New Recreation Ground (which must have been early January), they well knew that the latest time a sports meet would be held on that ground was before 7:00 pm as the facility did not have adequate lighting for night events.

So, did Mrs Carla Diamond and her team have the super sense that would have allowed them to predict that the sports meet would run into the night and that there would be adequate lighting? It is a valid question because the last event which was the 3,000 meters race, a 7 ½ lap event, started off at 9:27 pm. Yes, PM and not AM.

The meet which had started shortly after 2 pm (although the programme had said 12:30 pm in anticipation of finishing it before darkness set in) had three commentators, Mr Troy Mills, Mr Glenville Mills, and Mr Anthony Wiltshire (hereafter to be referred to as the Three Wise Men) had a running commentary that told the story.

Since this writer could not tell who was speaking among the Three Wise Men based on their voices, credit of what was said will not be attributed to any of them individually. However, the fact remains that they spoke volumes.

“This is a historical event,” said one of the Three Wise Men, when the starter cracked the gun to start the 3,000 meters race at9:27 pm. “We would have left here at 7:00 pm!. This is full confidence.”

Aha, why did he bring in ‘full confidence’? That question did not need to be asked as previously, one of the Three Wise Men had said: “Last year I had full confidence that the lights would come, but it was under a different dispensation that we now have the lights!”

The sports day, which was organised to international athletic standards, was held under the patronage of Mr Percy Daniel, the President of the school’s Parent Teachers Association, who accompanied by Principal Diamond and escorted by Captain (2ndSt. Kitts Boys’ Brigade) Austin Warner inspected athletes from the four houses – Blue, Green, Orange, and Red.

During a commentary before the races started, one of the Three Wise Men said over the PA system that the lights were installed the previous day (Thursday March 26) and he told the huge crowd that had gathered at the grounds: “The place was so bright you could have seen a pin drop.”

Also present was the local Federal Parliamentary Representative the Hon Shawn Richards, who was wearing a new (and real big) hat, as it was his first official public appearance in his home town as the new Deputy Prime Minister of St. Kitts and Nevis, and Minister of Education, Youth, and Sport.

The Three Wise Men were back on the mike and they praised the Hon Richards for doing wonders and bringing real change to the New Sandy Point Recreation Ground, only five days in office. Yes he was sworn in on Sunday February 22, but his first day in office was February 23. So, if the lights were installed on February 26 that was four days.

During an intermission, the Deputy Prime was given the chance to address the huge crowd that had gathered, and he told them that he was happy the sports meet was going ahead as was expected and that he was there not just as the representative of the constituency but also as the Minister with responsibility for Education and Sports.

“Over the years I have been complaining about the lighting here and I am still not 100 per cent satisfied with lighting this evening but I do believe it is a vast improvement,” said Hon Richards. “What you are seeing here today, that is temporary. We are going to take a look at the development of the entire play field here in Sandy Point, whether it is putting in additional seating, or lighting.

“I am sure come back next year lighting will be even much better than we have here this evening. At the far end, I want to give the assurance to those who are involved in playing tennis that the tennis court will be completed. I have already spoken to persons about providing facilities for the children also over on the far end of the field.”

The sports day started with the two lap 800 meters race and from the way it started, one could tell that Blue, Red and Green houses were smarting from losses that had been inflicted on them by the Orange House who had come into the field leading with 955 points from events held earlier. Red was in second with 911, followed by Green with 903 and pulling the tail was Blue with 886.

One spectator in the crowd was left crestfallen because one record was not broken. He took to the mike and threw a challenge to the athletes. He announced that whoever will break the Class 2 Male long jump next year he would receive a reward of $1,000. The man would also pay for all the awards the athlete will win.

Looking out for the person, he said that his name was Mr Kertney Thompson from Sandy Point who works as a Facilitation Manager with the Ministry of Education. Asked why he was so keen that the particular record be broken, he said that he is the current holder and that he had set in 1985 with a leap of 6.58 meters and that he wants to see progress in sports and this can only be achieved if old records are erased from the books.

At the end of the night, with persons leaving the recreation ground as late as a few minutes to 11:00 pm, Blue House had overturned the tables and was leading with a total of 1209 points, followed by Orange House with 1172 points, Red House with 1169 points, and bringing in the rear was Green House with 1015 points.

Prize giving will be held at a date to be announced, and even though the meet’s Chief Statistician Mr Kayton Blake has furnished us with the names of all the individual winners, we have chosen to hold them until the actual prize giving day, when Mrs Carla Diamond will officially let the cat out of the bag, and name the names.