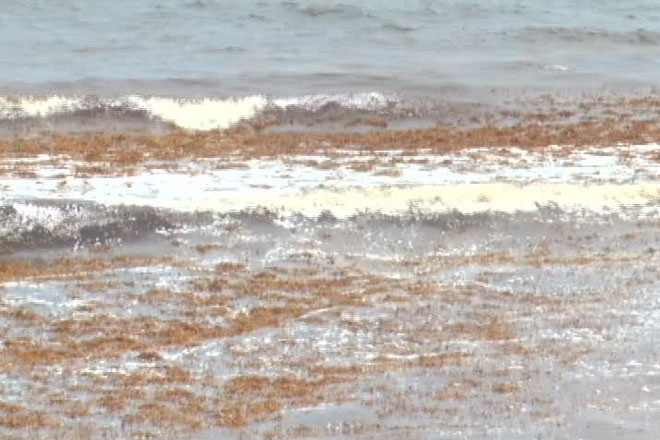 (ZIZ News) — As coastlines around St. Kitts become carpeted with sargassum seaweed, the plants are also having an impact on marine life.

Director of the St Kitts Sea Turtle Monitoring Network, Dr. Kimberly Stewart says the seaweed is posing a definite problem for turtles both on land and in the sea.

“On the beaches we’re beginning to have such an influx of it (seaweed). It’s several feet deep at this point,” she said.

“If that is over the top of the nest when it’s getting ready to hatch, then the hatchlings can’t get out. If it’s not actually over the nest but just in front the nest over the shoreline then they can actually crawl over that to get into the ocean so we have been really trying to catch these nests to catch these hatchlings before they get stranded in the sargassum,” she added

Dr Stewart said sea turtles can get trapped in the seaweed and drown.

“We actually had a small hawksbill around two years old stranded last week around North Friars,” she said.

“Typically at this age, these animals are very pelagic and they seek out those sargassum mats in the Atlantic to actually hide in and feed where they’re camouflaged and this case I think the mats was too large the turtle got trapped and washed in. Dr Denniset at the vet school did a necropsy and found the turtle had only the turtle’s GI was full of the sargassum. It actually starved to death because that was all it could access,” she added.

Dr. Stewart says if a person encounters a trapped turtle the best thing you can do is “get it in to the shade if possible obviously call us and we’ll get ready to respond. And get it into the shade get some water poured over it to cool it down because lots of times they’re experiencing hypothermia because they have been exposed for so long for so long. So those are important.”

Last week Barbados reported 37 dead turtles that drowned due to the sargassum seaweed.