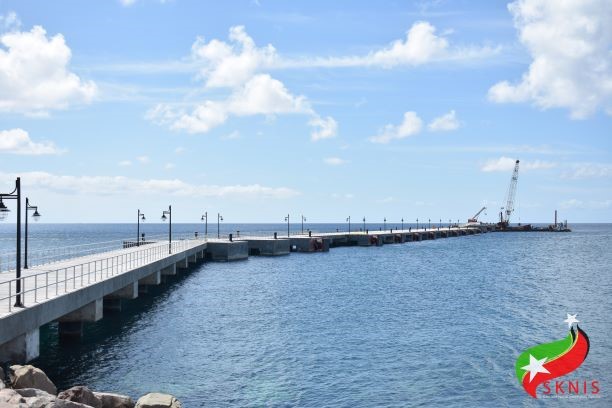 Basseterre, St. Kitts, September 09, 2021 (SKNIS): The St. Christopher Air and Sea Ports Authority (SCASPA) and the Government of St. Kitts, by extension, were granted arbitration award in the case relating to the second cruise pier at Port Zante.

The contractor initiated arbitration against SCASPA in 2019 over unpaid claims of U$15.2 million, which equates to over EC$41 million. SCASPA’s Acting Chief Executive Officer (CEO), Tuffida Stewart, said that a decision was rendered in June 2021.

“The tribunal ruled that the claims, most of them, were null and void,” Ms. Stewart stated on the September 08 edition of Working for You.

The contractor claimed US$1.5 million related directly to the contract work. Other claims ranged from stevedoring – loading and offloading; additional dredge work; additional piling; and cost increases during the process. Claims were also made for exceptional adverse weather conditions as well as utilities and more.

“Our engineer would have reviewed those claims and advised SCASPA that based on the contract that we have, which was a fixed-price contract, that those claims should not be honoured and so we agreed and we went to arbitration,” Ms. Stewart added.

The Tribunal ruling was overwhelmingly in favour of SCASPA.

“SCASPA was only liable to pay $294,000 in losses arising from adverse weather conditions and of course the $1.5 million that I spoke about initially, which related to the contract itself, that amount had to be paid,” Ms. Stewart indicated. “Out of the $15 million, SCASPA simply had to pay $294,000. The Tribunal awarded delayed damages to SCASPA, and so the contractor has to pay to SCASPA US$624,000,” she added.

The acting CEO expressed pleasure with the arbitration decision. She indicated that while there are several minor repairs to be carried out at the second cruise pier they do not impact the capability of the pier to accommodate Oasis Class vessels.

Hosting the world’s largest cruise vessels is particularly important as tourism authorities expect a significant uptick in cruise arrivals in St. Kitts and Nevis in the years ahead.