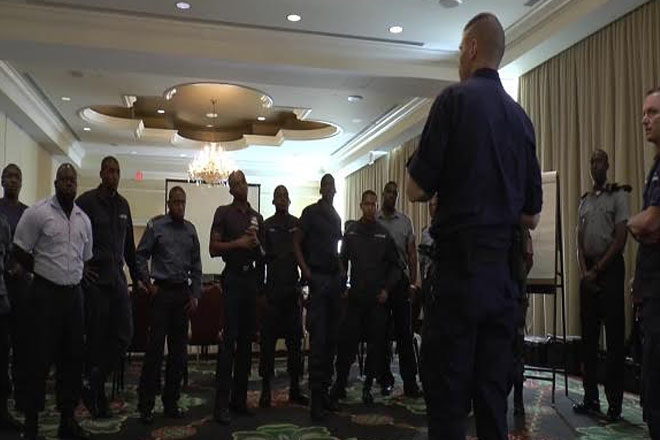 Security Personnel Being Trained Across St. Kitts as Part of Exercise Tradewinds 2015

(ZIZ News) — The 700 participants for Exercise Tradewinds 2015 are spread out across St. Kitts as the Maritime Phase of the exercise expands its reach.

Public Affairs Officer for the St. Kitts and Nevis Defence Force, Captain Kayode Sutton, was among the officers at the Marriott training site on Monday. He listed the other training stations.

Captain Sutton said Tradewinds 2015 encompasses different forms of training as there are maritime and human disaster aspects. He noted that the training exercises are happening simultaneously in the different locations.

Sutton also used the opportunity to appeal to the general public to cooperate with the security personnel as they seek to advance their skills.

“This has been ongoing, since we were preparing for Exercise Tradewinds in some of the public service announcements and so on, that we’ve put in place. We will try very hard not to inconvenience with some of the exercises that we’re doing but if people are inconvenienced, just a little bit, please bear with us. It’s all in an effort to make us safer or to enhance our capabilities to respond to some national issues that we may have so please cooperate with persons that you see, that you might come into contact with who are training or maybe in a block access..it’s all towards a good purpose,” he said.