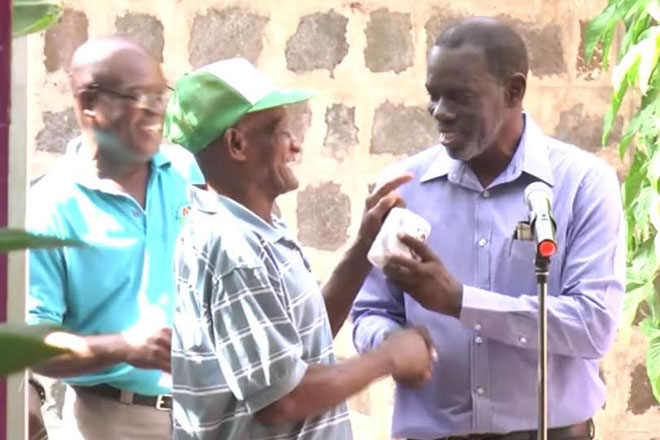 Instead of meeting at the landfill in Conaree where they discuss problems that face their operations and planning ahead, the April 30 meeting was held in downtown Basseterre at the Stone Walls Restaurant and in their midst was the Minister of State with responsibility for Health, Community Development, Gender Affairs and Social Services, the Hon Senator Wendy Phipps.

According to the master of ceremonies, Mr Randolph Browne Operations Officer at Solid Waste, it was a retirement breakfast meeting in honour of one of their colleagues. After serving for 22 years, revered garbage collector 78-year-old Mr Cephus Freeman was calling it a day.

Hon Wendy Phipps, who delivered feature remarks observed that she was participating in an exercise that although simple, it was meaningful and noted that it sent a strong message in terms of how people’s employment was valued. She commented that when the employment is good and exemplary, then is when staff members are treasured even more dearly.

She said the breakfast meeting gave them an opportunity to showcase somebody who had exhibited qualities beyond the call of duty, somebody who was on the job before time, stayed on the job after time, and at the same time would have garnered the respect, not just of the co-workers but the residents in the communities where he would have been collecting garbage.

“I just want to wish Mr Freeman well, to congratulate you on behalf of the government and people of St. Kitts and Nevis for I understand serving well over 22 years in terms of working in the sanitation sector,” she said. “I know from my own ministry we are indeed indebted to you. We wish you well in your future endeavours and we trust that your exemplary service to the Solid Waste Management Corporation will be a model for other people to follow.”

Minister of State Phipps apologised for the absence of the Hon Eugene Hamilton, the focal point minister in the Ministry of Health, who was on travel duties, saying that even though he was returning that same day, he would not have made it to the breakfast meeting.

Present at the farewell breakfast meeting were about 30 members of the Operations and Collection Departments, included two members of the board, Mr Calvin Edwards and Ms Yvette Bowers, and two of Mr Freeman’s children Mr Cuthbert Francis, who had travelled from Nevis where he works as a fireman, and Mrs Connie Thomas.

Mr Alphonso Bridgewater, General Manager, St. Christopher and Nevis Solid Waste Management Corporation, observed that there was symbolism in holding the meeting at Stone Walls instead of the Conaree landfill.

“For me there appears to be a little bit of a symbolism in the name Stone Walls, because in truth and in fact, the man who is centre-stage for us this morning Mr Cephus Freeman could be considered in many ways, a cornerstone of Solid Waste Management Corporation,” he said.

He announced that he would establish a special award in honour of Mr Freeman to be called the Cephus Freeman Award that would go to people who demonstrate the very best of their own version of 4Rs – Respect, Reliability, Responsibility and Regularity.

He advised those who are members of the collection team and the wider Solid Waste Corporation to take a cue from Mr Freeman, as he was a man who never grumbled, and he continued working until the point when he decided it was time to leave.

“Cephus, thanks a lot for your steadfastness, for the way in which you demonstrated responsibility, respect, reliability and your regularity at work,” said Mr Bridgewater. “Enjoy the retirement years.”

According to Mr Wilmon McCall, Operations Supervisor, Mr Cephus Freeman had worked 22 years in sanitation business, having started with the Health Department where he worked for a number of years before joining Solid Waste in 2002 when it was created.

“His shift begins at 4:00 o’clock, but he is town two or three hours before that and he never leaves until that job is completed after 6:30 pm five days a week,” observed Mr McCall. “If he is not coming to work, he will call and say that he won’t make it – a very mannerly gentleman. Somehow they do not make them like that anymore. He was simply one of those guys who I would like to see all our workers emulate.”

It was a colourful meeting as one of Mr Freeman’s colleagues, Mr Sylvester Wattley, a loader who last year went to Japan for a six-week training course told Mr Freeman, “You are truly a blessing to us. You inspired me,” following which he read the ‘Trash man’s prayer’.

Mr Romaine Belgrove, driver and leader of the team in which Mr Cephus Freeman worked, observed that Mr Freeman was only late once. “Even when it is raining really bad, he is in town. I wish you had another ten years in you. I won’t trade you for nobody else,” said Belgrove. He played Freeman’s favourite song ‘How Great Thou Art’, and the ‘Lord’s Prayer’ on a saxophone.

Other tributes came from Ms Schinelle Steven, Accounts Clerk, who read a poem dedicated to Mr Freeman, and closing remarks came from Mr Valentine Heyliger, Operations Officer, who said that Mr Freeman would turn up for duty even during hurricanes and thunderstorms.