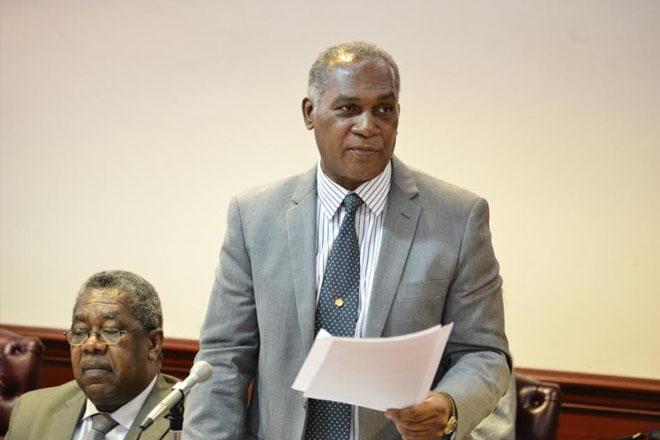 Basseterre, St. Kitts (SKNIS) — Senior Minister in the Federal Cabinet of St. Kitts and Nevis and Premier of Nevis the Honourable Vance Amory, has welcomed the passage of the Banking Bill 2015, noting that it increases protection for hard working citizens.

Honourable Amory, who also serves as the Minister of Finance in the Nevis Island Administration, pointed to a requirement of the Bill which outlined that financial institutions will be required to have a certain level of reserve funds. In the case of banks, they must have at least 20 percent of net profits recorded annually, transferred to the reserve fund.

For instance, if a local bank were to record $100 million net profit, then no less than $20 million must be placed in reserve at the Eastern Caribbean Central Bank (ECCB) or some other institution.

“The object of this aspect of the Bill is so that where there may unfortunately be any occurrence where the banks experiences distress, there is in fact a significant quantum of money there so that the depositors can be repaid and they are not left holding an empty bag,” he explained, while supporting the passage of the Bill through the federal parliament. “

This scenario played out 33 years ago with the collapse of the Bank of Commerce. Many depositors were unable to recover their savings/investments. Court proceedings began in 1985 to recover losses and a legal settlement was recently made awarding the payment of EC $15 million to the defunct bank’s clients.

Other aspects of the Bill praised by Senior Minister Amory were percentage caps on the value of major loans to a person or borrower group unless approved by the ECCB, as well as the regulations guiding the amount of illiquid assets (items that cannot be easily sold or exchanged for cash) that a bank can hold.

The latter was the case with the Bank of Commerce which had assets at the time of its collapse but did not have enough liquid assets to pay depositors.

The reforms are a part of a regional agenda to strengthen the banking system in order to facilitate economic growth and development among member states of the Eastern Caribbean Currency Union (ECCU).