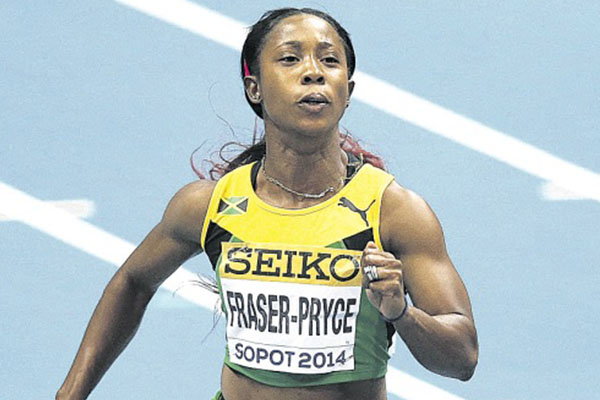 THE clash between Jamaica’s World and Olympic champion Shelly-Ann Fraser-Pryce and American Allyson Felix in the 200m is expected to be one of the highlights on today’s IAAF Diamond League meeting in Eugene, Oregon at the Prefontaine Classic.

The two were expected to battle out for the gold medal at last year’s IAAF World Championships in Moscow, Russia, but the American suffered an injury, while Fraser-Pryce went on to complete the sprint double after earlier winning the 100m.

They were also due to meet at the Jamaica International Invitational earlier this month but Felix pulled out as she was not 100 per cent fit.

Fraser-Pryce had pulled out of the Shanghai Diamond League meeting with an unspecified injury but should be back to full fitness after competing in the 4x200m relay at the IAAF World Relays in Nassau, Bahamas, last week.

The field today will be a competitive one, as in addition to Fraser-Pryce and Felix, World Championship medallists Murielle Ahoure of the Ivory Coast and Nigerian Blessing Okagbare, who has run 22.36 seconds already this year, will be going after the win. Also, the talented young Americans Jeneba Tarmoh and English Gardner will also line up.

Six other Jamaicans will also be taking part in the meet with Nickel Ashmeade, who was part of two winning teams at last weekend’s IAAF World Relays in the Bahamas and Nesta Carter, lining up against red-hot American Justin Gatlin in the men’s 100m.

Gatlin has the two fastest times in the world so far this year after running 9.87 seconds and 9.92 seconds, while the young French runner Jimmy Vicaut is fourth on the list with 9.95 seconds.

World leader Hansle Parchment will be tested by World Championship gold and silver medallists David Oliver and Ryan Wilson, respectively, as well as world record holder Aries Merritt in what should be an outstanding event.

Three-time IAAF Diamond League champion Kaliese Spencer will contest the 400m hurdles, and in the absence of World leader Kemi Adekoya, should be able to get the better of the field that should see 2011 World champion Lashinda Demus, Olympic finalist Georganne Moline and NCAA champion Kori Carter all of the USA.