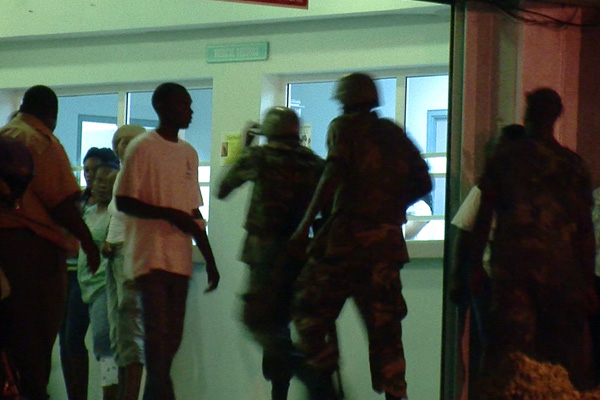 (ZIZ News) — The police are investigating a shooting incident that occurred at the Joseph N. France General Hospital Accident and Emergency Department on Monday night.

According to a police statement, two men entered the hospital and attacked 19-year-old Kaheel Herbert of Lower Thibou Avenue before escaping on foot.

Reports indicate that the men chased Herbert into the hospital and opened fire mortally injuring him.

Dozens of police and Defence Force personnel busily moved about the hospital grounds, emergency room area and lobby controlling the scene and preventing media and curious bystanders from crowding the area.

A large crowd gathered on JNF Hospital grounds as well; many were heard murmuring their shock that the incident occurred at a medical facility, others commenting that the perpetrators seemed bent on ‘finishing the job’ referring to the victim.

The police are asking anyone with information about this incident to contact the Violent Crime Unit at 662-9336, the nearest police station or Crime Stoppers at 1-800-8477.

You do not have to provide your personal information, and you may be eligible to receive a reward.