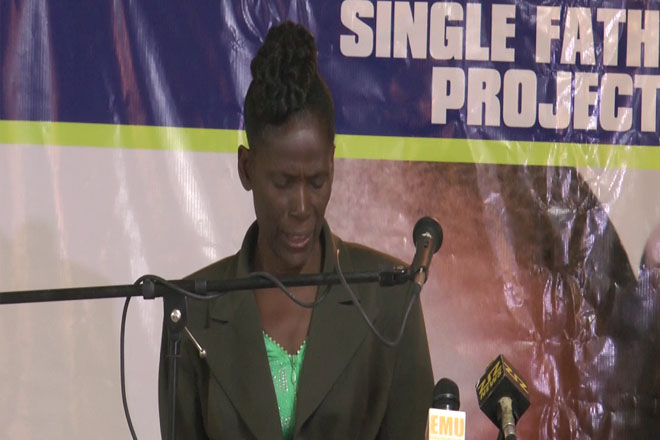 (ZIZ News) — Long serving educator and guidance counsellor, Ruby Thomas has been credited with being one of the people responsible for conceptualizing and spearheading the launch of the UNESCO Single Fathers Project in St. Kitts and Nevis.

Speaking at the launch of the project last Thursday, Mrs. Thomas explained the goal.

“About 150 fathers of infant and school-age children will be involved in the project, which has been designed to help fathers not only to learn, but to share their knowledge and to encourage other men to contribute to the building of this wonderful nation through their active involvement in the child-rearing process,” she said.

According to Mrs. Thomas, the eight-month long Education and Empowerment Progamme will be divided into four components which she went on to explain.

“The first two will focus on effective parenting and academic improvement. The third component will engage parents in the examination and discussion of current ills and the ones that could be possibly proposed for future legislation. And finally, a six- week activity conducted by the fathers will also be undertaken,” she said.

Thomas said an examination of the absence of one or both parents from the child rearing process is not the purpose of the project, but rather to ensure the quality of interaction between children and their caregivers.

The key elements of good parenting she said, lie in nurture, structure, recognition and empowerment.

She added that she is confident that at the project’s conclusion, its impact on the fathers and the community will be evident.

“Because of this, we feel assured that by the end of this year, the impact of the training that was offered will begin to be felt in our homes, in our schools and in the wider community,” she said.

The United Nations Educational, Scientific and Cultural Organization, UNESCO, has contributed $69,000 to the programme which is being conducted in collaboration with the Ripple Institute.