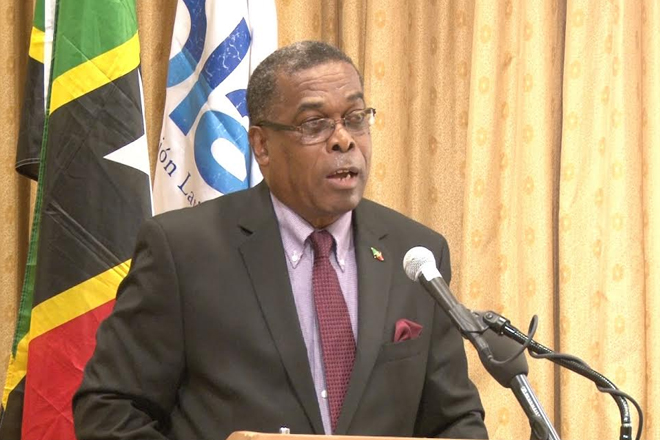 (ZIZ News) — St. Kitts and Nevis has presented a report outlining the developments within the electricity sector during the period 2010-2012.

The official launch of the 2010-2012 Energy Balances of St. Kitts and Nevis was held at the Marriott Resort on Thursday morning.

Addressing the gathering, Minister Responsible for Energy, the Hon. Ian Liburd explained that Olade, a technical advisor in the area of energy was enlisted to develop energy balances of six member countries of Community of Latin American and Caribbean States (CELAC).

The goal was to measure and evaluate energy use over a three year period.

Minister Liburd noted that, regarding the Federation, there was significant consumption of diesel and other fossil fuels but there were also some bright spots in the development of renewable energy.

“The introduction of wind in 2010 in our sister island of Nevis was found to have positively influence the electricity generation matrix thus resulting in a reduction in the consumption of diesel oil for the period under review 2010-2012,” he said.

He said St. Kitts-Nevis’ involvement in the energy report falls in line with the government’s commitment to pursue renewable energy sources for the Federation.

“Our government will thus continue to partner with countries, organizations and funding agencies in pursuing green pathways specifically in the areas solar, wind, and geothermal energy where growth is envisioned to be strong and sustainable,” he said.

Director of Integration at Olade, Lennys Rivera said the purpose of the project was to tackle the lack of information regarding energy use in the participating countries.

“There is no consistent source of information that can be used to analyse the situation of supply and demand of CELAC countries to assist the development projects, to diversify their energy matrix. In this project it was used the methodology of energy balances of Olade which is recognized as a national and regional planning tool,” she said.

The other countries also covered in energy reports are St. Lucia, Antigua and Barbuda, the Bahamas, Dominica, and St. Vincent and the Grenadines.