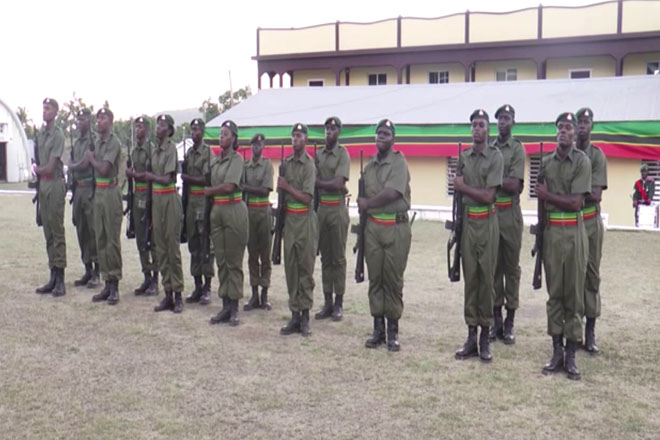 SKNDF Boosted with Addition of 16 Soldiers

(ZIZ News) – Sixteen recruits of the St. Kitts and Nevis Defence Force have graduated to the first rank of private, following a passing out ceremony on Thursday afternoon.

As part of the ceremony, the graduates showed off their precision and discipline in a brief drill presentation.

Eirate Mccall, Course Officer responsible for training the recruits, commended them on their courage and hard work and encouraged them to apply them to other areas in life.

He said, “It takes courage to face the trials, long nights and difficult PT sessions these men and women faced and now that you’ve achieved that courage, you will never forget it. Apply it not only in your military career but in your everyday life.”

Defence Force Commander, Lieutenant Colonel Patrick Wallace reinforced Mccall’s statements on courage and noted that loyalty is one of the pillars of the Defence Force.

“By wearing the uniform of the St. Kitts and Nevis Defence Force, you are expressing your loyalty to the country, to the constitution, to the Force, to your unit and to your fellow soldiers. The dictionary definition and the St. Kitts and Nevis values both imply that a loyal soldier is one who will support leadership at every level. From elected political official to the commissioned and non-commissioned officer who will have command over you,” Commander Wallace stated.

“I am certain that at the commencement of your training in October 2014, you were told that the journey on which you were about to embark on was a tedious and challenging one and not for the faint-hearted. But today you have demonstrated your worth,” he explained.

The Prime Minster specifically praised the female graduates, noting that the top three spots for best performance during the course went to females.

He said, “The exceptional performance of the Best Student awardee has resulted in her being selected and sent to Guyana to attend the Colonel Ulrich Pilgrim Officers Training School. If she were to successfully complete that course, she will be commissioned as 2nd Lieutenant and will earn the distinction of becoming the first Kittitian to graduate from that prestigious officer’s training school.”