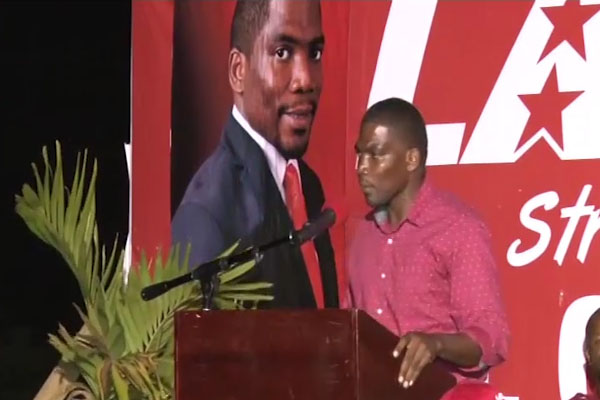 (ZIZ News) — The St. Kitts-Nevis Labour Party on Saturday fulfilled its promise of delivering a constituency office in the St. Peter’s community.

The new Labour Party Constituency Office was officially opened on Saturday during a ceremony and rally, witnessed by dozens of party supporters.

Speaking at the ceremony, the St. Kitts-Nevis Labour Party candidate for Constituency Number Eight, Dr. Terrence Drew said the new office is opened to everyone.

Dr. Drew also explained why there was an urgent need for him to open a constituency office.

“I am disappointed that the representative who you elected to serve you in St. Peter’s, he does not have an office. There is no place where you can meet your representative in St. Peter’s in this constituency. After last election, he shut down office, he abandoned you and if he abandoned you, I’m asking that you abandon him in the next general elections. That is why I had to move quickly to open an office because you must have a place to come and I don’t care whether you vote PAM in the past or not, this office is also for you,” he said.

Dr. Terrence Drew also thanked the former Labour Party representative for Constituency Number Eight, Cedric Liburd for laying the foundation for him to run as the next Labour representative.

Meanwhile, Dr. Drew has received one of his biggest endorsements yet from one of his fellow Springtime candidates.

The SKNLP candidate for Constituency Number Three, Konris Maynard said Dr. Drew is the right man for the job and is leading his opponent in every possible category.