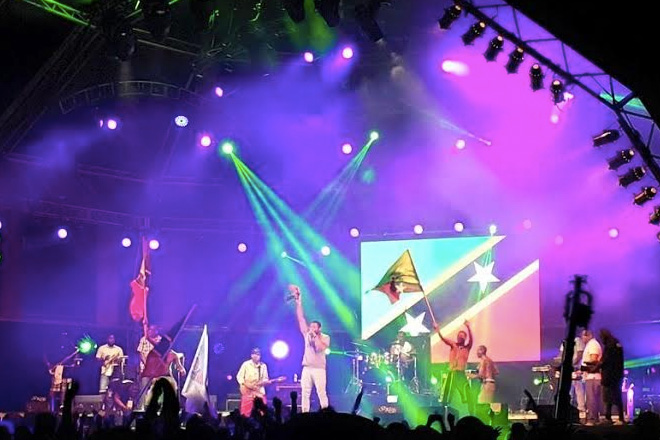 (ZIZ News) The 19th Annual St. Kitts Music Festival got off to a flying start on Thursday night with homegrown and regional actions showcasing the diverse musical styles of the Caribbean.

First up was the Odisi Band out of Nevis. They brought a line up of their biggest hits and were followed by Haitian compas band TVice, which brought its signature style and some Latin covers, creating a diverse sound to the crowd.

The Latin flavour continued as Tono Rosario and his band took the stage with a string of merengue hits.

Both TVice and Tono Rosario brought a strong section of followers to the front of the crowd which was made up mainly of members of the Haitian and Dominican communities.

The Small Axe Band was next on stage with an electrifying performance of its classic and recent hits.

By this time, the crowd at Warner Park had swelled to a significant size and the patrons crowded the front of the stage, all dancing to the sounds of St. Kitts’ Small Axe Band.

Next on the line-up was Roy Cape All Stars with lead vocalists Blaxx and Ricardo Drue. They kept the high energy going with a number of hits and a cover of Small Axe’s “Bottom In De Road”.

The All Stars also provided backup for Patrice Roberts whose hits like “A Little Whine”, and “Ah Feelin’ Mehself”, had the audience jumping and waving.

Roberts ended her set by introducing St. Kitts’ reigning Groovy Soca Monarch Mr. Bagnall. He began his set with an extended version of “Carnival Boss”, before transitioning to his other songs, sending fans into frenzy.

Benjai was next, performing an array of original songs and ending with the hit “Phenomenal”.

Kerwin DuBois brought down the curtain on the festival’s first night with a string of songs that had the audience waving flags and rags and singing along.