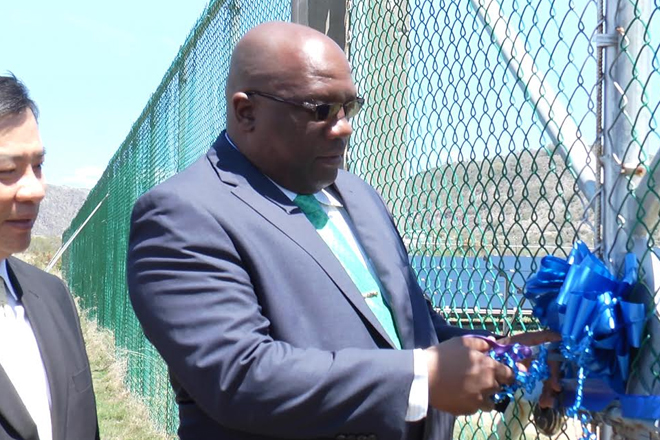 (ZIZ News) — On Thursday morning the Government of the Republic of China Taiwan handed over a new solar farm that had been built along the Frigate Bay Road near the Eastern Caribbean Central Bank.

Several government dignitaries attended a handing over ceremony at the solar farm site to mark the occasion.

During the presentation ceremony Ambassador Chiou spoke of the ties between the Federation and Taiwan that have led to developments such as the solar farm.

“Today we come here to witness another milestone which St. Kitts and Nevis is developing its own renewable energy. This is the best proof that the Honourable Minister Liburd can present to the international forum as the long term diplomatic friends to St. Kitts and Nevis. Taiwan will continue stand with you to fulfil this commitment,” he said.

Minister Liburd said this is part of the Federation’s move to become a green nation.

“We are blessed with wind and the CEO made mention of a wind project, The North Star project and I’m asking the chairman to expedite that project because that project has been around for several years but we need to get our renewable energy programm running and the North Star project is one project that once project that, once agreed by the Board will generate some 5 Megawatts of energy,” he said.

CEO of SKELEC, Cartwright Farrell spoke of the benefits of renewable energy for the average citizen.

“While I must caution us that the cost of electricity will not come down to the levels that we expect through renewable energy, it in fact, will minimize the content of fuel surcharge on our bills. And once the fuel surcharge is minimized it will reduce the fluctuations in our energy bills,” he said.

It was announced earlier that two more solar farms are being planned to generate a total of one megawatt of power.

Construction began in January of 2015 and the project was jointly funded by the Taiwanese government and the St. Kitts Electricity Company.