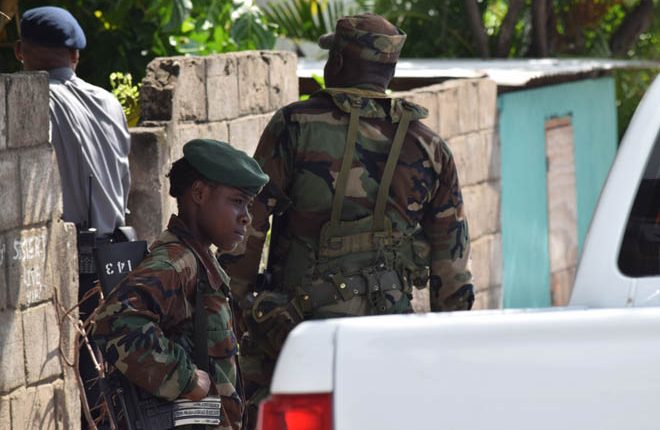 (SKNDF): Soldiers of the St. Kitts Nevis Defence Force have embraced their role as a key partner in ensuring Citizen Safety in St. Kitts and Nevis; so says Lt. Col Patrick Wallace, Commander of the Force.

As a result of being granted enhanced powers for the next six (6) months the Defence Force as a major partner in the prevention and the fight against crime in St. Kitts and Nevis can be much more effective in supporting the Royal St. Christopher and Nevis Police Force and other National Security Agencies to suppress criminal activities.

Land and Sea assets of the Defence Force are a part of the ongoing Citizen Safety Operations in the Federation. Defence Force Soldiers are routinely on patrol with the Police, and have been imbedded in units that carry out searches and other type operations. The Coast Guard regularly patrol our coastline and the territorial waters to interdict illicit activity.

Lt. Col Wallace shared that the soldiers have clearly embraced their increasing role in ensuring Citizen Safety and National Security. He said, “Several of my soldiers, especially the younger soldiers have openly commented that this increased participation in crime prevention by the Defence Force is a good thing” and said, “others have echoed that they have join the Military for this purpose.”

The Force Commander said the feeling at Camp Springfield can be summed in a recent statement made by a soldier preparing for a patrol, who said “this is what I came to do, if going out every night and conducting Stop and Search Patrols means that we will take another gun from the streets, if it means we keep those who plan to do bad from moving around or if it means that persons can sleep better at night, then I’m good. This is why I joined the Force, to make a difference.”

Lt. Col Wallace also expressed that the collaborative relationship between the Defence Force participating agencies is strong; that leaders meet regularly to review Operations and the way forward.

The Force Commander expressed “it is important to note, that Citizen Safety and National Security are dependent on each other” and made it clear, “we in the Defence Force are happy to do our part.”