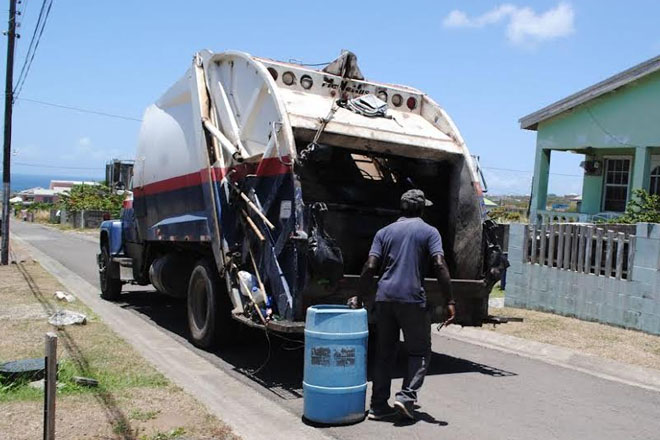 Basseterre, St. Kitts — The Solid Waste Management Corporation (SWMC) St. Kitts is renewing its appeal to household owners to desist from using metal drums as garbage disposal bins, as they pose a safety threat to the organisation’s workers.

Operations Supervisor Mr. Wilmon McCall is advising that while the use of discarded oil drums was the norm when the corporation started its operations, a notice to discontinue their use was issued in March 2005 when all concerned were advised to use plastic barrels instead.

“When we started the whole system of Solid Waste Management Corporation, it was customary for everyone to acquire a 55 gallon oil drum as a garbage disposal bin,” explained Mr McCall. “But we discovered that waste as it was, was heavy enough never mind the weight of the bin. We thought that the bin was too heavy for some of the oil drums were very thick and the weight was really not good for our workers.

“And so, we felt that it was simply too dangerous for these guys to have these heavy bins lifting. We had one guy whose toe was damaged at one point. We had several fellows with cuts across their hands because of the rugged edges of the drums from people trying to cut them out.”

It was hard to enforce the order as many persons did not want to part with the metal drums. One overzealous household owner offered to be lifting the metal drum when the Solid Waste truck came around — he however gave up after several bravado attempts at lifting the drum.

“Our workers were oftentimes threatened, but the process continued throughout the island,” said Mr McCall. “We simply discarded anything that was metallic. We took them by force, and it didn’t go down very well, but overtime people came to understand.”

He explained that by 2013 all the metal drums had been removed. But while this would have called for a celebration on a job well done, word is now filtering through and Solid Waste has learnt that in some area of the island, especially those served by outsourced garbage collectors, there is a reintroduction of metal drums.

Solid Waste personnel who work in the garbage collection and disposal unit hold a monthly meeting at the Conaree landfill on the last Thursday of each month where they discuss challenges facing them. On Thursday July 30 workers from Admiral’s (2008) Limited, which is an outsourced company, confirmed the sighting of metal drums in areas such as Sandy Point, Half Way Tree, Old Road and St. Peter’s.

“There is a slow reintroduction of those things in the system within a certain side of the island where our service providers are operating,” said Mr McCall. “So we spoke to the workers and hopefully we will have those removed.

“Because of our policy now, a metal drum sticks out somehow for some people. It sticks out because all these other drums are plastic but this one is metal, and so as a result of that our workers pick out that quite easily.”

He did however admit that while a metal drum lasts much longer than the plastic barrels, the corporation has not had any problems with workers reporting lacerations across their hands from the plastic drums, while damage to the toes is not evident because of the lack of weight of the plastic barrels drums.

“One of the disadvantages with these plastic drums is that they are made of polythene and other material that could be evaporated by the sun,” explained Mr McCall. “So over time you leave it in the sun, slowly but surely it evaporates. The polythene is the chemical that makes it flexible.

“Once the polythene goes, it becomes brittle and then if it falls, it breaks, and some people say, you mash up my drum. That is the only disadvantage. Metal bin would be there for a very long time, get rusty but still they pose a very serious danger to the health of our workers.”

Mr McCall said that he expected those who have reintroduced metal drums to think of the workers’ plight, and replace them with the user friendly plastic barrels without having to get to the stage where Solid Waste would be forced to remove and crush them.