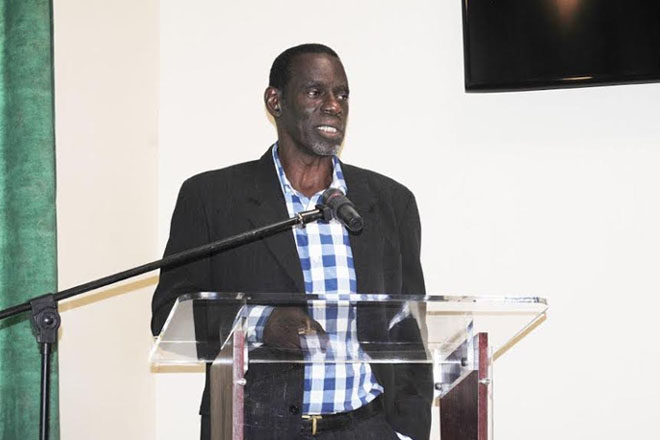 Basseterre, St. Kitts — In executing its core philosophical principles and themes which is in its second leg, having commenced the journey last year, workers of the Solid Waste Management Corporation were called upon to ‘Think Summons’, to ‘Think Solidarity’, and to Think Special’.

The call was made by the corporation’s General Manager Mr Alphonso Bridgewater during this year’s annual General Assembly which was held on Thursday September 24th at the conference centre of the corporation’s new headquarters at Taylor’s.

Held under the theme ‘Reaching Outward’, Mr Bridgewater explained that the purpose of the General Assembly is to bring the entire work force of the corporation to meet in one place for consultation, commendation and (re)commitment, noting that communication, dialogue, participation and fellowship are critical to the process throughout the day.

“These two thematic thrusts constitute two-thirds of the tripartite philosophical signposts on which the Corporation is founded, namely ‘Looking Inward, Reaching Outward and Projecting Forward’.”

The General Assembly, which was also attended by the Federal Minister with responsibility for Solid Waste Management Corporation – SWMC (St. Kitts) the Hon Eugene Hamilton and by the new members of the board, was chaired by Accounts Officer Ms Cassandra Greene and was facilitated by Mr Denzil Crooke, the CEO and Principal with Quantum Consulting.

“The General Assembly, I see it like a ‘summons’,” said the General Manager. “It is a call to come together. I have no other way of knowing and seeing the faces of Solid Waste members of staff other than when we do this.”

He said it also applied to the other members of the staff and pointed out to them that the assembly was a way of their coming together as a family where the focus would be more on what they have been doing on the positive side.

“It is a summons as well, to each one of us to see if we could look within us and say, how could I reach out to a member of staff and do better than I did to make them feel at home,” advised Mr Bridgewater. “If they are sick, look out for them. Do not wait to go to their funerals. People want you more when they are alive than when they are dead.”

In asking the workers to think ‘solidarity’, the General Manager told them that they do not know how strong one is until they come together in an event like the General Assembly. “Get to know each other, as there is strength in numbers and there is strength in unity,” he admonished. “Apart from the fact that there is a summons, I want you to recognise that there is some solidarity coming out of this. Reach out to each other… reach out and touch the other…. Everybody stand up. You have to greet everybody.”

He finally requested the workers to ‘think special’ revealing to them that it was not by chance that they were holding this year’s General Assembly in the new conference centre.

“We delayed hiring out this particular space – this conference facility – to anybody until Solid Waste Management staff was able to use it for the first time,” said Mr Bridgewater. “We have about a half a dozen people waiting, but we said nobody from outside will come and christen it before we did.”

As Mr Bridgewater presented opening remarks he introduced the new members of the Solid Waste Management Corporation’s Board of Directors, which is led by Mr Randolph Edmeade who is the Director of the Department of Physical Planning and Environment.

Six members of staff were recognised by the General Manager Mr Alphonso Bridgewater for their outstanding contribution in their various departments and to the institution in general. Each was presented with a watch courtesy of a long standing partner of Solid Waste Pastor Lincoln Hazell of the Apostolic Faith Church. The watches were presented to them by the Hon Eugene Hamilton.

They were Ms Schinelle Steven of Accounts Department for her punctuality and perseverance, Ms Icilma Henry of Administration Department/Office Attendant for her diligence and dedication to duty and determination to keep staff properly nourished, and Mr George Collins of the Landfill Division for his ‘stick-to-it-ive-ness’, responsiveness and long service.

Others were Ms Valerie Whyte of Administration Department for her commitment to duty, evidence of promise and willingness to assume additional responsibilities, Mr Dale Eddy of the Mechanical Unit for evidence of teachability and marked progress from apprentice status to graded mechanical status and Ms Tyasha Henry a Litter Warden from the Enforcement Division for her reliability, resilience and resourcefulness.