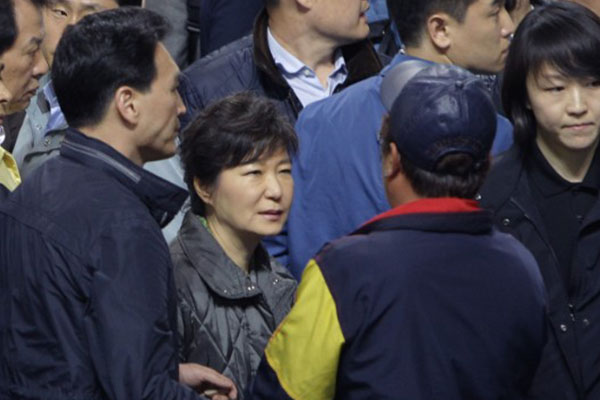 Seoul, South Korea (CNN) — The web of blame in the South Korean ferry sinking is getting wider, and now the country’s president is accepting some of the heat.

President Park Geun-hye apologized to the nation Tuesday over the government’s initial response to the Sewol ferry tragedy.

“I am losing sleep as there is no news about saving more lives and because there are many families who don’t know whether their loved ones are dead or alive still,” the president said.

“I am at a loss for words for an apology that can be enough to console the pain and suffering even for a little while over insufficiency in efforts made to prevent the accident and also in the initial response to the accident,” she added.

“I am sorry, and my heart is heavy that so many precious lives are lost because of the accident.”

Earlier Tuesday, Park attended a memorial in Ansan, the Seoul suburb where hundreds of students on board the ship were from. She talked to family members and laid flowers at the memorial site.

“We’ll fix the problems and change our practices so we’ll have safer nation and won’t let them die in vain,” Park said.

The ferry sank April 16 on the country’s southwest coast. The number of dead now stands at 205. Another 97 are still missing.

“All we are asking for is, ‘Bring the dead bodies out,'” a father wailed Tuesday. “We know they are not alive now.”

On Monday, South Korean authorities arrested three people on suspicion of destroying evidence connected to the ferry sinking. Investigators also raided a Coast Guard office in a probe of how officials handled the first emergency call from a passenger.

The director and two other people with the Korea Shipping Association’s Incheon office were arrested and accused of destroying evidence related to the probe of Chonghaejin, the company that owns the ferry.

The Korea Shipping Association is a trade group that promotes the interests of the country’s shipping industry.

The site raided was the Coast Guard building in Mokpo, which includes the South Jeolla province emergency center — a facility that provides 119 services, akin to the 911 emergency service in the United States.

Investigators are looking into possible dereliction of duty.