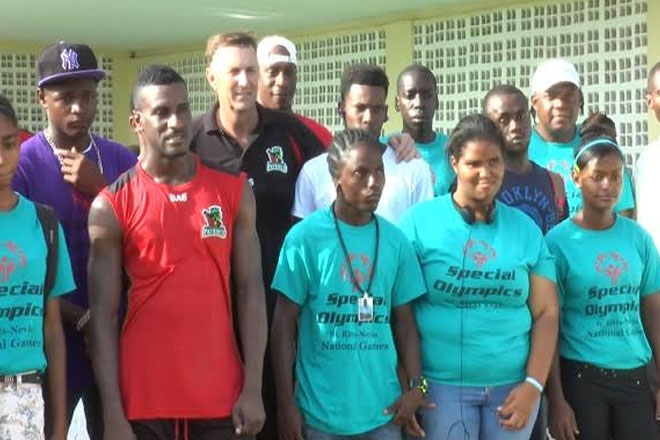 The lone Kittitian on the team, Jacques Taylor said it is important for athletes to support each other.

“It’s been a pleasure having these youngsters coming around and sharing our expertise with them in which ever sporting department whether it be tennis, football, swimming and athletics, it’s good that we could give support to these guys from a sporting standpoint,” he said.

The meet and greet comes ahead of the young athletes’ participation in the 2015 Special Olympics World Games.

Taylor took the opportunity to pledge the Patriots’ support of the team.

“It’s nice that the St. Kitts Patriots can actually meet some of the Special Olympics before they head off to their tournament in Florida. We wish them all the best and our support is with them all the way throughout,” he said.

At the meet and greet, a donation was made to the Special Olympics team by the Social Security Board.

The skn Special Olympics Team will travel to Los Angeles California for the world games slated for July 25th to August 2nd.