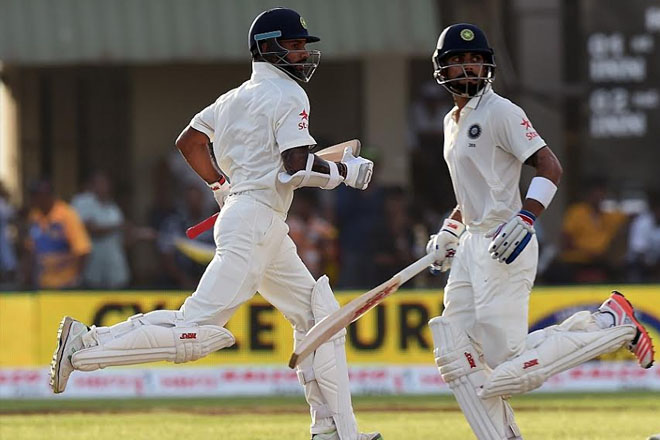 Sports Page — For the first time since the Wellington Test of February 2014, India got to bat with little pressure and could look forward to sessions of piling on runs. Back then they had bowled New Zealand out for 192, and took a lead of 246. Ten tough Tests later, having dismissed Sri Lanka for 183, India didn’t quite bat Sri Lanka out of the game, but managed a healthy 192-run lead. It left Sri Lanka a narrow window, but in the four overs they had in the field, the Indian spinners bowled out the openers to now threaten a three-day finish.

Shikhar Dhawan and Virat Kohli both completed fluent hundreds, and for a change, India were now against an attack missing the quality and the spirit of the ones that have tested them recently. Dhawan responded with his second century in two Tests, Kohli with his fourth century in his fourth Test as captain, and Wriddhiman Saha hit a maiden fifty. Kohli is now on the brink of his first win as captain, and Saha on his first as a Test player.