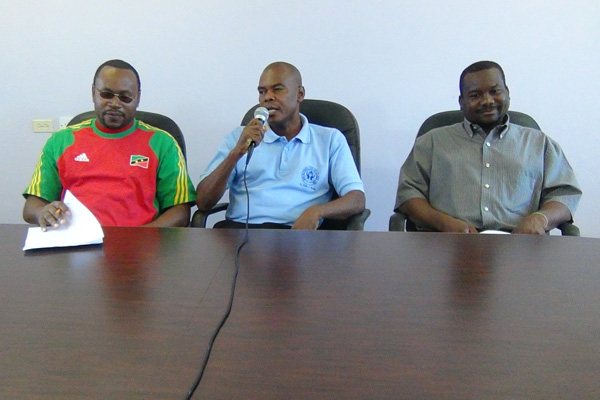 Sports officials report to the nation

(Sports Page) On Friday 11th October, Permanent Secretary in the Ministry of Sports on Nevis, Mr. Keith Glasgow and the Ag. Director of Sports, Mr. Jamir Claxton, sat down in an exclusive interview with NTV Sports to report on a recent meeting that they both attended.

The very important meeting was held in St. George’s in Grenada from the 3rd to 4th October. It was a meeting of OECS Ministers and Directors of Sports. Mr. Glasgow filled in for Junior Minister of Sports, Mrs. Hazel Brandy-Williams who was unable to attend.

Both gentlemen elaborated on some of the issues that were discussed at the meeting and highlighted two draft resolutions that were tabled.

“Whereas the OECS Ministers and Directors recognize the importance of sports as a vehicle for improving the physical well being, social cohesion and economic condition of the people of the OECS member states AND whereas the OECS Sports Ministers and Directors recognize the national, regional and international acclaim which can be realized from the outstanding performance of athletes from the region And

Whereas the OECS Sports Ministers and Directors recognize the significant benefits to be derived from strengthening the sports education and training system for administrators, athletes; officials, technicians and support staff in the sector, AND

Whereas the OECS Sports Ministers and Directors recognize the specific roles of the various key stakeholders in the region, but the necessity for partnering for the development of the sports sector, be it RESOLVED THAT

OECS Governments will seek to partner with National Olympic committees, the Caribbean Association of national Olympic Associations; regional sports federations such as the West Indies Cricket Board, Caribbean sports development Association and other regional sports entities to develop a concept paper for the establishment of an OECS institute of sports that will provide quality sports education and training services to key stakeholders including governments and sports and recreational entities and any other goods and services demanded by the OECS Ministers of sports.”

In light of the resolution, both gentlemen committed the full support of the Nevis Sports Department in developing regular Netball competitions in the Primary and Secondary schools and within the various communities throughout the island. They also committed to fully supporting the Nevis Netball Association in the administration of the Sport on the island and ensuring that the Grell Hull -Stevens Netball Complex is rehabilitated and specific systems put in place for its future maintenance and security.

Towards the end of the interview, Claxton also announced that Coca Cola is currently undertaking a world cup promotion, leading up to the 2014 world cup and will be touching some 88 courtiers including St.Kitts and Nevis

The world cup trophy will be in the Federation of St.Kitts and Nevis on Saturday October 19th and interested persons on both islands will have an opportunity to view the trophy up close and take photographs. The possibility of bringing the trophy to Nevis was explored but that was negated due to security concerns.

He also indicated that a Leeward Islands competition for schools is being worked on which will feature action in various sports over a possible ten day period.