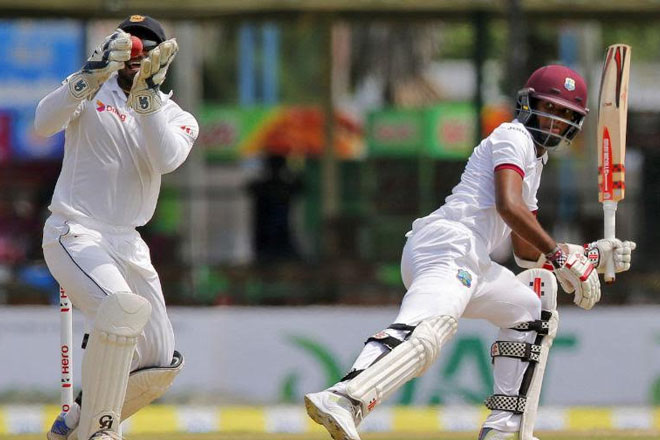 (Sri Lanka) – There is a saying that: “The phoenix must burn to emerge.” Well, Caribbean fans have only been waiting 20 years for the once powerful West Indies to emerge.

At the start of play on the second day of the second and final Test today at the P Sara Oval in Sri Lanka, there was hope that they could advance towards dominance in a foreign Test but that wonderful team that flew around the world with such pride, is still burning.

At the end of yet another dismal day in the annals of West Indies cricket, the men in maroon responding to Sri Lanka’s 200 all out made just 163. Sri Lanka batting a second time, lost a wicket first ball but recovered to 76/2 at the close of play.

After the disappointing batting display, Jerome Taylor as he had done in the first innings struck in his first over. Off the very first ball of the innings he had Dimuth Siriwardena caught by Devendra Bishoo at square leg. The West Indies players got back to life, only for Kaushal Silva and Kusal Mendis to snuff it out with a stubborn second wicket stand of 55.

Impressive debutant Jomel Warrican nabbed Mendis for 39 deep into the final session and had some close calls against Silva and Dinesh Chandimal but they survived and will resume this morning with Sri Lanka 113 runs ahead and eight wickets still standing. Silva was unbeaten on 31 and Chandimal five.

Resuming on the bedtime position of 17/1, the West Indies soon lost the night watchman Devendra Bishoo and the early wicket gave Sri Lanka a boost that they took full advantage of.

Marlon Samuels continued his wretched form against the Sri Lankans and although spending some time at the crease he touched one from Malinda Siriwardana and left for 13. His average in 16 innings against Sri Lanka is now 10.06.

Soon after Siriwardana accounted for mainstay Brathwaite for 47, although television replays suggested that he might have missed the ball but third umpire Marais Erasmus saw differently. He batted for 164 minutes, faced 101 balls and struck three of them to the ropes.

Damika Prasad came back to rush off Jermaine Blackwood. There was some semblance of resistance from Holder and Denesh Ramdin but a rush of blood sent Ramdin back into the Tryphon Mirando Stand and only soon followed for 21.

D Chandimal not out*5