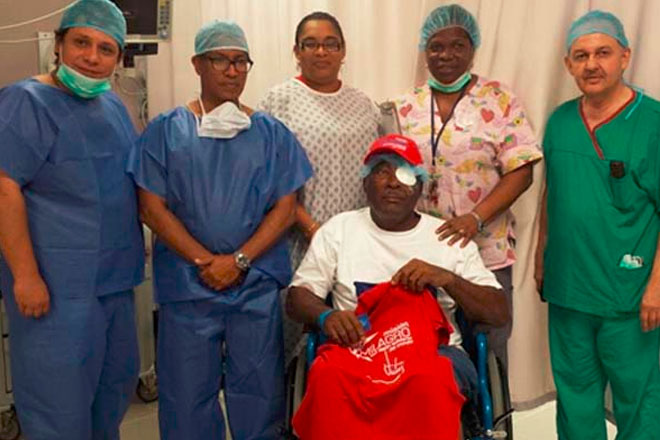 St. Kitts and Nevis among other Eastern Caribbean Countries to benefit from Miracle Mission

Basseterre, St. Kitts (SKNIS) — Locals with impaired vision will get the chance for a better view when Miracle Mission revisits the Federation of St. Kitts and Nevis during the last quarter of 2015, according to Bernardo Alvarez Herrera, President of PDV Caribe and Executive Secretary of the ALBA-TCP.

Miracle Mission was launched on July 08th, 2004, beginning with a trip of Venezuelans to Cuba, who benefited from surgical interventions for cataracts. The initiative continued until August 25, 2005, when the Presidents of Cuba and Venezuela, Fidel Castro and Hugo Chavez respectively, signed the Sandino Commitment, in which the parties agreed that surgical interventions would be performed on six million people with visual afflictions during a 10 year period.

From April 2015, screenings for the Miracle Mission Foundation were initiated in the Eastern Caribbean within the framework of the cooperative relations promoted by the ALBA-TCP with the support of PDV Caribe, a subsidiary of Petróleos de Venezuela in charge of the operation of the PETROCARIBE Agreement. The initiative started in St. Vincent and the Grenadines, with the result of 1,178 people with visual afflictions being treated.

Scores of Kittitians and Nevisians benefitted from Miracle Mission in 2005 when they travelled to Cuba for eye care. Miracle Mission has also carried out surgical interventions that have benefitted patients from Antigua and Barbuda. Dominica and Grenada will benefit from the services of the Miracle Mission later this year.