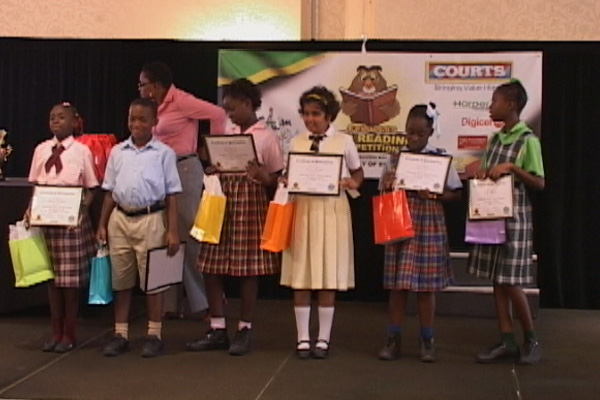 St. Kitts and Nevis and Courts – Reading you Loud and Clear

(EMU): The Ministry of Education in St. Kitts and Nevis is doing its part to promote regional integration as it facilitated the St. Kitts-Nevis round of the Courts OECS Reading Competition last week.

Education Officer Debbie Isaac, one of the main organizers of the event, said in brief remarks she was happy to welcome students from six finalist schools to the competition:

She used the opportunity to thank coach teachers and parents for their hard work and invaluable support to the finalists.

Major sponsor, Courts (St. Kitts & Nevis) Ltd. representative said that Courts OECS searched for some years for an activity that would unite countries of the OECS where Courts stores are located. She said not only was Courts satisfied that this Reading Competition has succeeded in uniting Courts OECS territories, but was certain that this activity had fast risen to become the premier regional competition on the primary school agenda in the region.

The competition was separated into two rounds that required students to read a narrative piece for the first round and a news item for the second round. Students were judged on reading fluency, accuracy, enunciation, smoothness, confidence and expression.

Asharie will go on to represent the federation in the Courts Regional Reading Competition Finals which will be held in Castries, St. Lucia on October 17.