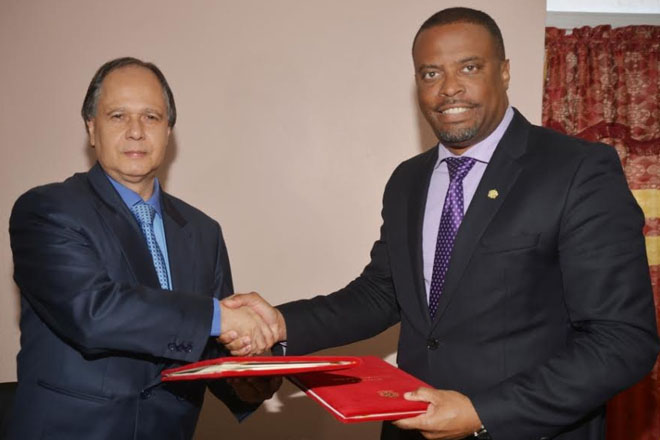 (SKNIS): The Government of St. Kitts and Nevis and the Federative Republic of Brazil signed a Technical Cooperation Agreement on Friday, April 15. The agreement was signed by the Honourable Mark Brantley, Minister of Foreign Affairs and His Excellency (H.E.) Douglas Wanderly de Vasconcellos.

Minister Brantley thanked H.E. Vasconcellos for affording the Federation the opportunity to sign the agreement and said that it is his hope that it provides a framework for both countries to deepen and strengthen relations.

The foreign affairs minister outlined a number of opportunities and benefits that emerged from the relations between St. Kitts and Nevis and the Federative Republic of Brazil and noted that the possibility exists for more.

“We know you have tremendous expertise in football and sports generally,” said Minister Brantley. “That is an area also that I think we can cooperate in, in order for our people to benefit. St. Kitts and Nevis as you know is a football crazy island just like Brazil. There are opportunities for exchange in language training in Portuguese and English, opportunities even in the context of healthcare. Brazil is known for its healthcare and culture; your carnival is one of the best known carnivals in the world and so these are all examples of where we can benefit mutually from this relationship.”

The minister described the signing of the Technical Cooperation Agreement as important as it gives St. Kitts and Nevis as a Small Island Developing State (SIDS) the opportunity to demonstrate to the citizens that through diplomacy the Government is able to attract and engage with much larger countries that share common values with the Federation.

H.E. Vasconcellos said that Brazil’s Technical Cooperation differs from others and “part of its success in providing such assistance to Latin American, African and Caribbean countries derives from the fact that Brazil shares some common challenges and tested solutions” with the territories.

He revealed that the agreement does not come with any expectations.

In response to the no strings attached statement, Minister Brantley echoed his views and noted that he is pleased to learn that Brazil offers assistance on such basis.

“It is true as you know that many times assistance is offered and there are strings attached and so I think our public will be delighted to know that in the context of our relationship with Brazil that there are no strings attached and that we approach these matters bilaterally,” said Minister Brantley. “We approach these matters on a nation to nation basis in the interest of the ties that exist between our peoples and the commonalities that you described.”

St. Kitts and Nevis and the Federative Republic of Brazil established diplomatic relations in 1985. In August 1995, a Brazilian Cooperation Fund Agreement was established between the Federative Republic of Brazil and the Organization of American States (OAS) to facilitate partnership projects aimed at the exchange of technology and the transfer of expertise in areas beneficial to the citizens of both parties. Areas included education and training of human resources in member states, whether in Brazil or in the receiving country, as well as provision of advisory and consulting service through the dispatch of Brazilian experts at the request of member states.

On June 06, 2014, Brazil approved the Visa Waiver Agreement for holders of St. Kitts and Nevis Diplomatic, Official or Service Passports. The Agreement was signed on January 20, 2015 and came into effect on March 07, 2015.