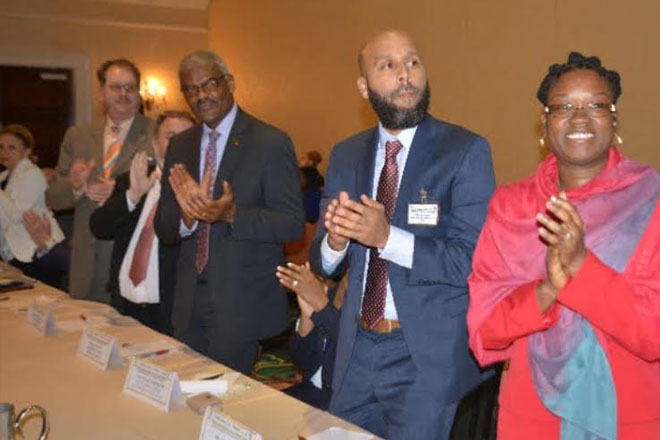 (SKNIS): Verna Morris, Chargé d’affaires at the Embassy of St. Kitts and Nevis in Havana, Cuba, said that the Federation is currently serving at an interesting phase in the history of the Spanish-speaking country when its relationship with the Unites States (US) is warming.

Ms. Morris made these comments during a press conference on Monday, April 04, which was organized as part of the Ministry of Foreign Affairs (MOFA) Diplomatic Week 2016.

“I have been posted at a time when Cuba is actually going through some interesting developments in its history with the US and I am very happy to be there at this time to experience history as it unfolds,” said Ms. Morris, while adding that she was granted the opportunity to witness the reopening of the US Embassy in Havana which was attended by John Kerry, Secretary of State.

Ms. Morris stated that through this new phase, a number of countries have forged new relations or strengthened those that already existed with Cuba.

“What we have happening there in Cuba is that there are many countries that did not have diplomatic ties with Cuba and now Cuba is the hot topic,” she said. “So now, they are going to Cuba and establishing and forging diplomatic ties. Last year, apart from the US, we have had several other embassies that established missions there and just to name a few I would like to highlight the United Arab Emirates (UAE) and Gabon. Kenya is also thinking of opening its mission.”

The Chargé d’affaires said that there are a number of benefits available and she hopes that the St. Kitts and Nevis Embassy in Havana can utilize them.

“We are hoping that with the presence of so many missions there as well, that we can do some country profiling,” she said. “And see how best some of these countries can assist us to develop our national development agenda and move forward from there into establishing ties with countries into whose markets we can actually advance.”