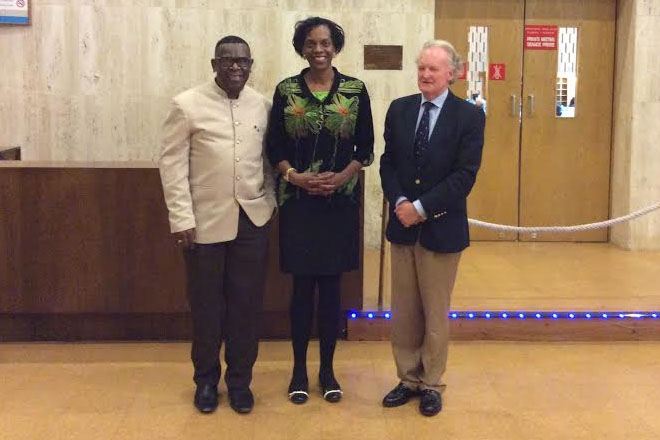 St. Kitts and Nevis lead at Unesco Board Meeting

Antonio Maynard, official representative to the UNESCO executive board and Dr. David Doyle, ambassador of St. Kitts and Nevis to UNESCO, lead the debate on the “Report on the outcomes of the Third International Conference on Small Island Developing States (SIDS) and proposed follow-up action within the organization’s programme and budget 2014-2017.

Dr. Doyle, founding Chairman of the SIDS ad hoc Committee for Representatives to UNECO addressed the session, and stated that it is critical and timely for the SIDS UNESCO constituency to develop a focused, robust and results-oriented action plan over the next four years to achieve the desired results.

“The new government wishes to underline St. Kitts and Nevis’ continued support to UNESCO, its objective, values and importantly its core filled of expertise,” stated Maynard. “In the past year, UNESCO has demonstrated the tangible value of this expertise on the ground in St. Kitts and Nevis, in education and TVET policy, Man and the Biosphere and in early-warning preparedness against natural hazards.”

Mr. Maynard reinforced SIDS perspective stating that “St. Kitts and Nevis in many respects reflected the epitome of SIDS. It really exemplifies the values of UNESCO in its efforts towards the achievement, and application of democratic governance, stability and prosperity within a culture of peace for all the people of St. Kitts and Nevis, as one of the smallest independent nations in the world.”

During the 196th session, the executive board was instrumental in securing a consensus and tabling a draft resolution calling for a robust UNESCO Action Plan for future activities in SIDS.

The Resolution, which was approved unanimously by the 38 states, underlined the need for improved disclosure of the key SIDS programmes and activities earmarked for the small island members to UNESCO and the “functioning gap” that needed to be filled with extra-budgetary funds to accomplish the ambitious UNESCO Action Plan.