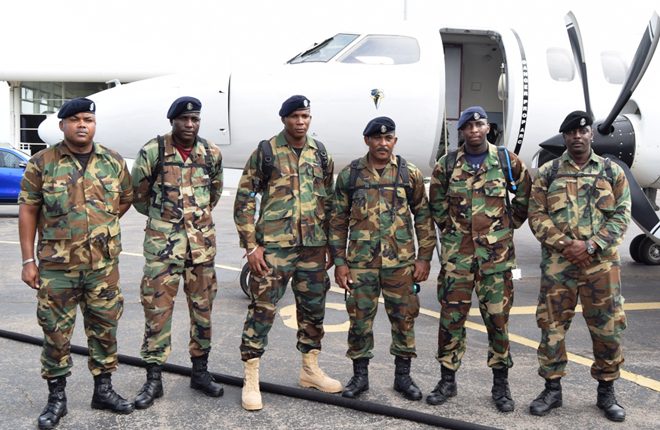 (Press Unit in the Office of the Prime Minister) – A six-member team of officers from the Royal St. Christopher and Nevis Police Force is currently in the neighbouring island of the Commonwealth of Dominica as part of a Regional Security System (RSS) mission that is providing much needed security and humanitarian services to citizens and residents of the storm-ravaged Caribbean island.

Director of Operations and Plans at the Regional Security System (RSS), Major (Ret’d) Jeffrey Forde, in an interview with Press Unit in the Office of the Prime Minister, said this RSS response in Dominica falls under Article 4 (1) of the 1996 Treaty. That section of the treaty states: “The purposes and functions of the System are to promote co-operation among the Member States in the prevention and interdiction of traffic in illegal narcotic drugs, in national emergencies, search and rescue, immigration control, fisheries protection, customs and excise control maritime policing duties, natural and other disasters, pollution control, combating threats to national security, the prevention of smuggling, and in the protection of off-shore installations and exclusive economic zones.”

Major Forde said “The RSS, on a whole, mobilized troops with a view of helping them in terms of bringing some sort of normalcy to Dominica. So what that did now is trigger our Treaty – the RSS Treaty. Firstly, we had the troops on standby waiting to be deployed. My Executive Director would have then spoken to the Prime Minister to let him know what is happening, then he would have received a call from our chairman of the Council of Ministers. He (the Prime Minister) would have then given the Commissioner of Police the go ahead to take troops out of the Federation and into the Commonwealth of Dominica to assist.”

The Regional Security System official further noted that the projected path of Hurricane Maria at the time, coupled with the state of the island’s airport facilities, prevented the RSS from mobilizing troops sooner from several neighbouring islands, including St. Kitts and Nevis.

The St. Kitts and Nevis officers have since joined other officers of the disciplined forces, including the police, military and fire services, from across the region, working as a single unit to help restore order and assist with recovery and rebuilding efforts.

“That is the beauty of our treaty where you have military, police and fire coming under one unified body, working as a team to assist Dominica. For example, in Dominica the force commander is a Deputy Commissioner of Police from Antigua, and under him the RSS member states work together with him, both military and police,” the RSS Director added.

It is expected that the officers will be in Dominica for about a month, as that country looks to rebuild in the wake of Hurricane Maria.