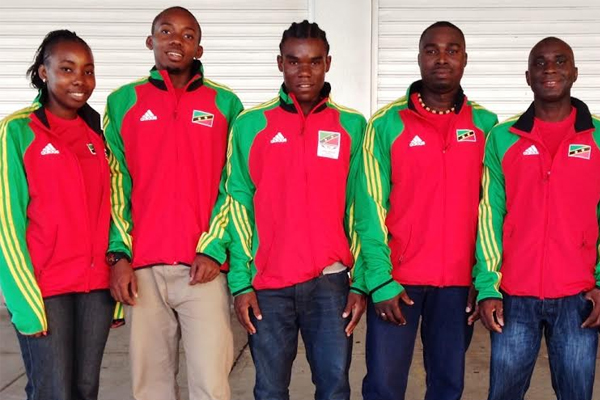 The team is led by Coach Brian Gillis, joined by five players; Calvin Lake, Vidal Hendrickson and Andre Freeman who constitute the Men’s Team for the event and Angelisa Freeman the lone female competing in the Women Singles.

Kevin Hope, SKNTTA President, expressed his optimism that the contingent can compete and do well within the Caribbean group once they exhibit the mental strength and confidence in their approach to each game played in El Salvador. “Given the recent international exposure for the athletes such as LATTU Championship in Dominican Republic and the Commonwealth Games in Scotland, I am confident the athletes can build on the competition experience and I anticipate improvements in El Salvador.”

He acknowledged the significant investment placed in the young table tennis athletes by the St Kitts and Nevis Olympic Committee and SKNAAA via donations in team equipment and financing the trip to El Salvador.

Coach Brian Gillis reiterated that the athletes’ preparation for the events does not stop upon boarding the plane to El Salvador, “We have to ensure that our participation in these events are of a high standard, players improving year on year and ensuring that we have programmes all season long to monitor player development and improving the quality of coaching.” He further emphasized that they represented the future of table tennis in the Federation and ought to take ownership of the responsibility entrusted in them to make the nation proud.

Fifteen nations are expected to participate in the tournament with an estimated 120 players competing for Latin American glory. Of the 15 teams in the Central American and Caribbean region, only the top 8 teams will qualify for the November 2014 CAC Games in Mexico.