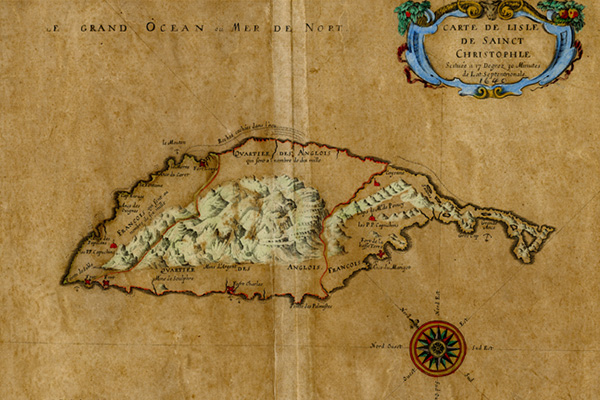 Basseterre, St. Kitts, January 10, 2014 (SKNIS): The National Archives of St. Kitts has commenced 2014 by providing interesting samples of the history of St. Kitts and Nevis through its Gems of the Archives initiative.

Archivist Mrs. Victoria O’Flaherty informed the St. Kitts and Nevis Information Service that the chosen “gems” should be of interest to the general public

“Maybe sometimes, they [the general public] won’t appreciate them [the gems] directly, but by giving them a little story behind it, they will realize the value,” Mrs. O’Flaherty explained.  “They are valuable, maybe not from the monetary point of view, but from the historical, emotional point of view.”

The Archivist further outlined that the first “gem” sent out via email was of masquerades standing in front of the Paragon Pharmacy, Basseterre in 1920.  She explained that this is at the bottom of Church Street where National Caribbean Insurance is currently located.  The pharmacy was said to belong to Victor John who also had pharmacies in Sandy Point and Dieppe Bay.  Paragon was also the meeting place for the early Workers’ League which was the forerunner of the St. Kitts-Nevis Trades and Labour Union.  Mrs. O’Flaherty explained that it was not clear whether or not Mr. John was directly linked with the photograph itself, although in those days pharmacies were the agent-distributors for photographic film.  She explained how the National Archives came in possession of the photo.

“Somebody gave us some negatives and they didn’t even know what was on them,” Mrs. O’Flaherty noted.  “They said ‘if there’s anything in it you can keep it – very likely they’re not even from here.’  When we had them developed, we found that particular item, which to me was precious.”

Mrs. O’Flaherty revealed how she came up with the concept for Gems of the Archives.

“I was looking at some apps that I had on an iPad and they were from the National Archives in the United Kingdom and the US – the one from the US was more or less the inspiration for this one,” the Archivist said.  “They have an app where every day they show a particular document and tell a bit about its background.  I figured, let me try and do it here and see what happens, but we don’t have the money to develop an app but we have email, so we’re using that.”

The second “gem” to be emailed was the first documented map of St. Kitts and Nevis.  Archivist O’Flaherty said that the “gems” will not be limited to photographs and maps.

“Clippings from newspapers, letters – they may be official or not official.”  Mrs. O’Flaherty outlined.  “We’re looking also at a report or maybe a court case – you know, things like that.  So there’s a lot that will be coming out.”