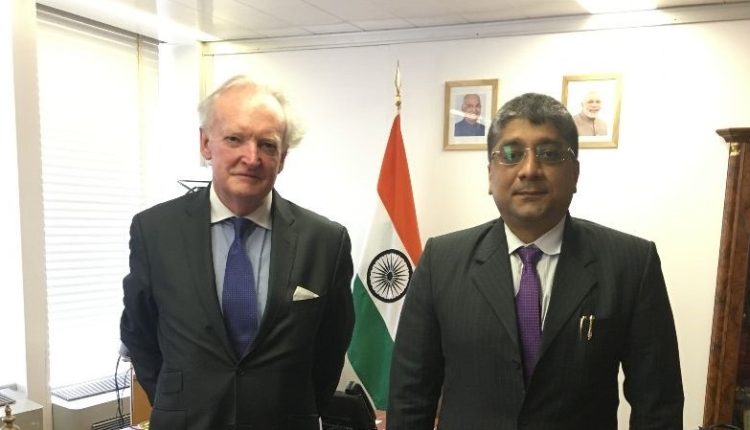 Paris, France, February 08, 2021: The Federation’s permanent delegate to UNESCO, Ambassador David Doyle, conferred this week with his counterpart, H.E. Ambassador Vishal V. Sharma, representing the Republic of India, in an exchange of views on UNESCO activities of mutual interest.

Discussions focused on India’s quest to secure a seat on the influential UNESCO World Heritage Committee, a body on which St. Kitts and Nevis sits for the past four years, and now enjoys the privilege of being the only SIDS (Small Island Developing States) member.

Both envoys agreed that India’s accession to this Committee would strengthen the Commonwealth presence on this Committee, currently comprising Uganda, Australia, South Africa, and the Federation.

India, a member of UNESCO since 1946, “has much to offer the UNESCO heritage community”, noted Ambassador Doyle, with such world-renowned sites as the Taj Mahal, Agra Fort, and Jantar Mantar (Jaipur), making up its 28 world heritage monuments and sites.

The envoys discussed the latest IT techniques pioneered by India in creating virtual museums tracing important historical events in the country’s past.  Given St. Kitts & Nevis’ work in reconstructing its own historical legacy, and updating its federal world heritage tentative list, it was felt that certain best practices employed in India could be meaningfully used in the Federation.

Ambassador Sharma, who was accredited as India’s permanent delegate to UNESCO in October 2020, had previously worked as part of the Project Team implementing the Museum on Prime Ministers at Teen Murti Bhawan, New Delhi, under the Ministry of Culture.

Underlining the importance of both countries being a member of the Commonwealth, Ambassador Doyle noted “the renewed interest with India’s presence at UNESCO to strengthen the Commonwealth Group to UNESCO”, a dedicated UNESCO committee comprising permanent delegates of the 54 UNESCO member states making up the Commonwealth.  A large proportion of this Group is small island developing states seeking to have their voice heard at UNESCO, and at other important international organizations, and representing 20 percent of the UN membership.

The envoys agreed to work together in re-energizing the Commonwealth Group to UNESCO.