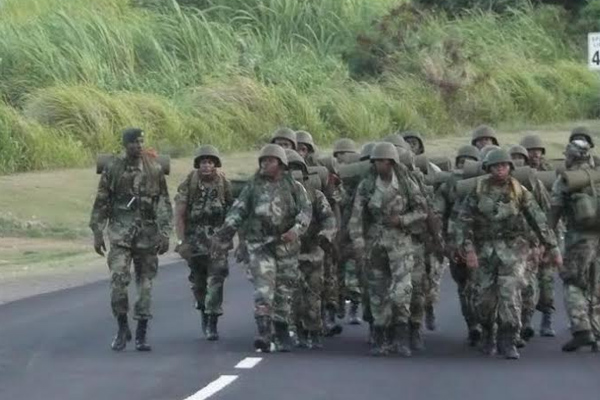 Basseterre, St. Kitts– With their scarlet flag flying and their drums beating, members of the St. Kitts Nevis Regiment of the St. Kitts Nevis Defence Force (SKNDF) dressed in combat uniform marched through the streets of Basseterre on the morning of Tuesday June 10th 2014, to commemorate the forty seventh (47th) anniversary of the failed June 10 1967 attempt to capture Camp Springfield by Anguillan rebels and local political dissidents supported by American mercenaries.

The armed attack on Camp Springfield was part of an attempted Coup to remove from power, the lawfully elected Government of the day. The significance this annual event is to remember the bravery and selfless commitment to duty of the men of then St Kitts Nevis Anguilla Defence Force who were prepared to make the ultimate sacrifice in defence of democracy.

The SKNDF through this medium wishes to thank the general public for its open display of appreciation, not only for the soldiers as they marched in celebration of the 10th June ’67 Victory, but also for the cooperation and support rendered in all security operations to suppress criminal activities in the Federation. The Force reaffirms its commitment to support the Police in ensuring security and safety for citizens, guests and visitors to our Federation and resolute defenders of its cherished democratic norms.