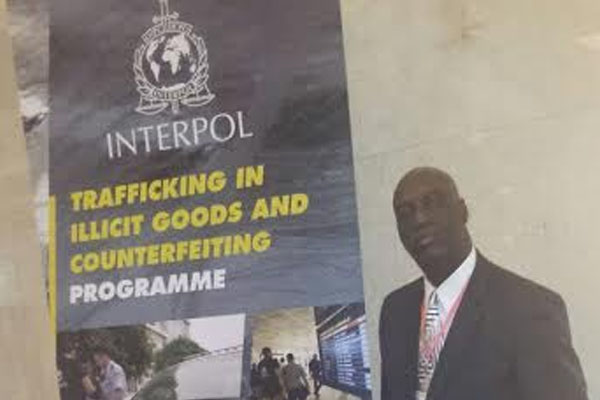 Organised by the International Criminal Police Organization (INTERPOL) some 500 officials attended the September 23 to 25 meeting where delegates exchanged ideas and reviewed best practices on detecting and combating counterfeit goods. The areas were explored in plenary sessions and smaller breakout groups, operational workshops and round tables.

Commissioner Walwyn, represented the Association of Caribbean Commissioners of Police (ACCP), which has 24 members states.

“The purpose of this meeting was to educate law enforcement on the abundance of counterfeit products in the worldwide market,” COP Walwyn stated. “Here in St. Kitts and Nevis, we found that we have certain businesses that display and sell counterfeit products and we have to address the situation. We were taught by INTERPOL how to approach this, how to identify the product and how to conduct the investigation with the support of the owners of the intellectual property.”

Some persons opt to buy counterfeit products because they are typically sold at prices lower than the original item. However this can be dangerous. The Commissioner referenced a case of product counterfeiting that became a threat to public safety.

“Trinidad and Tobago, last year they had four house fires and people died in those fires and it was determined based on the arson investigation that the cause was counterfeit lights,” he said, adding that they lacked the same quality standard used in the originally manufactured items. “In the Dominican Republic, they were making (counterfeit) Viagra pills for men. The Viagra pills were really sawdust compressed into the shape of a pill and they took the little portable cigarette mixers, filled them with blue paint and dumped the pills in there so that they would turn blue and they sold them as Viagra.”

The products reportedly did not find their way into the local market. While the Police will work with the Customs and Excise Department in tackling these issues, Commissioner Walwyn said there are precautions that persons can take.

“The public should only go to areas where they know are legit to buy their products,” he emphasized. “If the doctor sends you to a pharmacy, go to an actual pharmacy. Do not buy products on the internet because you don’t know what’s in it. You don’t know the integrity of the substances that you are putting into your body. So if you get a prescription buy it from a local pharmacy.”