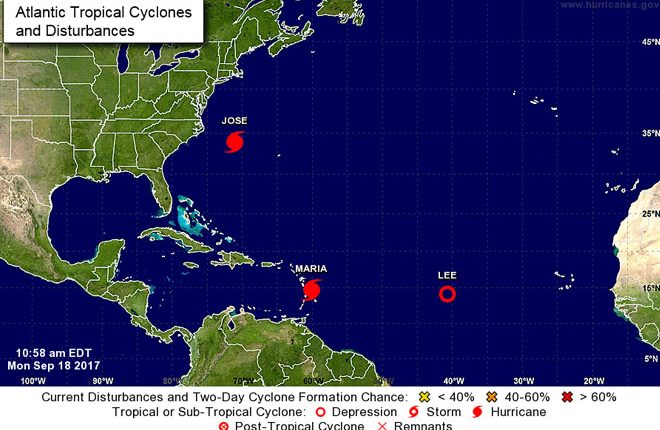 (PRESS SEC) – As at 11:00am today, Monday, September 18th, 2017, the National Hurricane Center based in Miami, Florida reported that Hurricane Maria had rapidly intensified into a major hurricane, with the eye expected to move through the Leeward Islands late this afternoon or this evening.

A hurricane warning is in effect for St. Kitts and Nevis, meaning that “hurricane conditions are expected somewhere within the warning area” and “preparations to protect life and property should be rushed to completion,” according to the National Hurricane Center.

With maximum sustained winds near 120 miles per hour, Maria is a Category 3 hurricane on the Saffir-Simpson Hurricane Wind Scale.

“Additional rapid strengthening” is forecast during the next 48 hours, the National Hurricane Center also reported.

Residents and visitors should keep monitoring the advisories on the progress of Hurricane Maria.

As Prime Minister Dr. the Honourable Timothy Harris stated on national radio on Wednesday, September 6th, while giving his initial observations following the passage of Hurricane Irma, the public’s cooperation is essential and greatly appreciated by the St. Kitts-Nevis authorities.

Prime Minister Harris noted then that, “In essence, our people as a whole responded well to all of the advisories and information presented to them for their own safety and security. This high level of responsiveness helped to mitigate what could have been a catastrophe.”