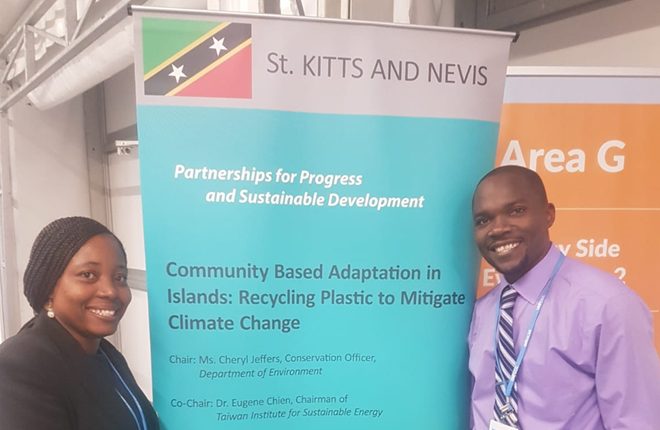 St. Kitts-Nevis strengthens ties with the Republic of China (Taiwan) at COP24

The government of St. Kitts and Nevis in collaboration with the Republic of China (Taiwan) hosted a side event branded “community based adaptation in islands: recycling plastic to mitigate climate change” on Tuesday, December 04, as part of an activity of the 24th Conference of the Parties (COP24) currently being held in Katowice, Poland.

St. Kitts and Nevis is represented by Cheryl Jeffers, Conservation Officer and Derionne Edmeade, Environmental Education Officer. commenting on the side event, Ms. Jeffers noted that, “the session examined the partnership schemes in islands that can help to build resilience of ecosystems, through community awareness and livelihood sustainability recycling programmes.”

The conservation officer expressed thanks to the government and people of Taiwan for the support provided thus far. She reminded the audience that “coastal areas and ecosystems of islands are highly vulnerable to climate change and, as such, partnerships such as these are highly welcomed.”

She added that in St. Kitts and Nevis, plastics have been identified as an emerging problem.

The conference, which runs from December 2-14, 2018, is being hailed as a “Paris 2.0” and the most important conference of the parties since COP21 (2015), where the Paris agreement was adopted. The Paris agreement entered into force on November 04, 2016, and at this conference parties are expected to complete the mandate agreed in 2016 to adopt the rules, modalities and procedures necessary for its implementation.