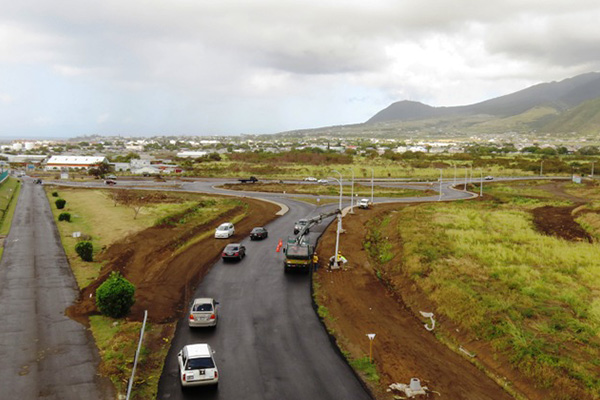 The project, being done in various phases, will also create jobs and reduce congestion, fuel usage and vehicle maintenance costs.

“We have completed a few phases already. The first phase that was completed is the Cockleshell Bay road on the South East Peninsular and as we move forward, we will complete that phase close to the Marriott Round about,” he told reporters and the Nation.

“At the conclusion of that phase, we would see the ‘benching’ of Timothy Hill and the construction of a tunnel at the Timothy Hill,” said Dr. Martin.

“This has definitely assisted both vehicular and pedestrian traffic in this area and I am sure upon its completion, it will definitely enhance the flow of traffic. The lengthy times that persons spend waiting in those areas have definitely been reduced for the past weeks and I can assure the general public that it will improve the traffic flow in that area,” said Deputy Prime Minister Martin.

He also disclosed that larger drains have been built in the areas of Sandown Road and a section of Pond Road.

“This is another phase that has just been completed about a week ago which corrects the drainage problems which we were encountering on the Sandown Road and on the Pond Road,” said Minister Martin, who further disclosed that the second phase of the Pond Road Rehabilitation Project is to start in two weeks.

“It involves eliminating the drainage problems that we are continuing to experience on Pond Road and that includes improving the sidewalks and the area stretching from the Pond Road east as far as the TDC Home and Building Materials Depot,” Dr. Martin said.

He said there is also the ongoing construction of new roads and resurfacing of existing roads in several villages and communities over the last several months.

“This is an area that we will continue to work on,” said Deputy Prime Minister Martin.

He gave the assurance that the Ministry of Housing, Public Works and Public Utilities continues to play a critical role in the overall infrastructural development of St. Kitts and Nevis.