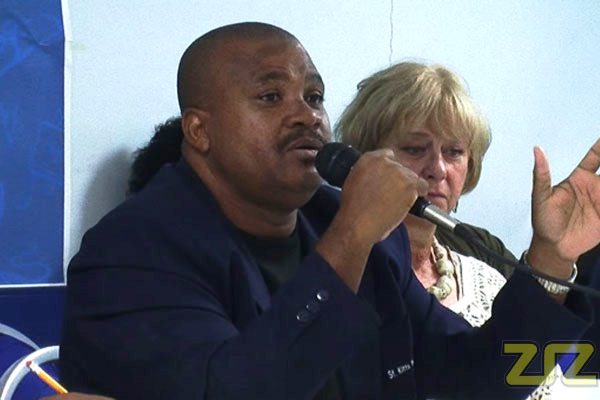 ZIZ News — Members of the St. Kitts Teachers’ Union held a press conference Friday to list their grievances with the situation at Basseterre High School.

Among the concerns were the rationale behind the transfer of teachers and the way the Ministry of Education addressed health concerns at the school.

BHS Steward, Claudine Saunders said remedies proposed by the ministry, such as the shift system with the Washington Archibald High School, were a quick fix and they are having a negative psychological impact on the students.

She said, “Before I started my sessions with some of my groups I’d say to them ‘Tell me how you’re feeling’. And students would say ‘Miss Saunders, when are we going back to we own school? We don’t like up here. The children keep saying things when we passing’. So they did not feel a sense of belonging. They just felt like they were thrown out there. It’s like you’re in the deep blue ocean, you either swim or drown and I think many did in the exams…I think most drowned.”

SKTU President, Ron Collins said they also feel that the planned transfer of teachers out of Basseterre High is being done as punishment.

“It is our belief that it is being used as a punitive action against teachers who 1) stood on a matter of principles on the Basseterre High School issues…teachers who reported their illnesses. We believe that it is being clouded in this supposedly good measure to empower schools to actually punish teachers in other schools who were strong advocates for the Union,” he explained.

The union also stated that they want to establish a panel of experts to examine the CARPHA report on the environmental status of BHS.

Collins said while the union is critical of the ministry’s overall handling of the BHS issue, it is willing to dialogue to find a permanent solution.

“Our thing is not to start trouble. But we have to take a position of defence in the interest of our members. In an environment of distrust let us do what is right and work with one another.”

The St. Kitts Teachers’ Union will be hosting a public forum on Monday at OJ’s Convention Centre. It is inviting teachers, parents, ministry officials and any other interested persons to discuss the issues at BHS and help find a way forward.